This contribution to our Case of the Month section discusses a frequent but unfortunately common clinical situation that occurs when even mild tension in the anterior scalene muscle mimics other possible pathological conditions developed secondarily on the upper extremity. For this reason in medical massage and manual therapy, the anterior scalene muscle is referred to as the “silent killer.” Even mild tension in the anterior scalene muscle may irritate different parts of the brachial plexus, which in turn may mimic any abnormality from rotator cuff-like symptoms to tingling in the 5th finger. If tension in the anterior scalene muscle is mild, the patient will not complain about uncomfortable sensations on the anterior or posterior neck. His or her symptoms will be located in the areas of the upper extremity where the affected part of the nerve ends. In these cases, the patient sometimes undergoes months of unsuccessful treatment by different health practitioners who are treating the results rather than the real cause of the pathological symptoms. Daniel Lopes, LMT discusses the consequences of this misdiagnosis in his Case of the Month contribution. Daniel’ client told him that all previous medical consultants had diagnosed her shoulder as the main cause of her pain. Simple but clinically informative tests allowed Daniel to correctly isolate the actual cause of his client’s suffering and enabled him to choose the correct MEDICAL MASSAGE PROTOCOL. This Case of the Month also illustrates another distinctive feature of medical massage: The combination of simplicity and clinical effectiveness. As readers will see below, Daniel was able to completely eliminate what seemed as a very complex pain syndrome in only three (!) sessions using MEDICAL MASSAGE PROTOCOL for the Anterior Scalene Muscle Syndrome. You may find the entire protocol of the Anterior Scalene Muscle Syndrome, which Daniel has used, in our Video Library as a free presentation.

My client is an 87-year-old female who suffers from diabetes and arthritis. She has been suffering with severe pain in her left shoulder for six months due to a fall. Prior to seeing me, she had seen a physician who had taken x-rays, and she also had received chiropractic treatments. The client had also taken prescription pain medications. Due to the lack of positive results, she sought a different approach.

When I examined the client, she was in a tremendous amount of pain. She was unable to raise her arm in forward flexion or side abduction more than 20%. During palpation of the shoulder area, she jumped and yelled, reporting that the pain sensation was extreme. Due to the intensity of her pain in the area of the shoulder, I chose to perform the Sensory Test. This provided me with the exact information about which peripheral nerve was being affected. My client felt a decrease of sensations along C7-C8 dermatomes on the forearm and hand. Next, I proceeded with the Wartenberg’s Test, a very accurate test, to inform me if tension had developed in the middle and lower thirds of the anterior scalene muscle. Finding the tests positive, I began with the protocol for the Anterior Scalene Muscle Syndrome from the Video Library of this website.

We scheduled a second visit three days later. When the client arrived, she reported that after the first treatment, her arms felt very heavy and painful. Regardless of this sensation, she shared that for the first time in six months of pain she was able to sleep through the night.

I began this treatment by palpating the shoulder, and this time she only reported mild pain. It is important to note that I was using the same pressure as when she came in for her first treatment. On a pain scale of 1 through 10, she reported 10+ at the first treatment versus the second treatment at 6. I then began working on the posterior neck and shoulders, starting with effleurage strokes in the direction of drainage, beginning from the upper back and neck.

Technically, for the first two or three strokes, I used superficial effleurage, and later switched to deep effleurage, maintaining a fold of skin in front of the fingertips during the stroke. Following MEDICAL MASSAGE PROTOCOL, I concentrated along the insertion of the trapezius muscle into the spine of the scapula, and then worked on the posterior neck concentrating on the C5 to C7 level using relaxation of the cervical paravertebral muscles. To end the treatment, I worked in the anterior neck and utilized PIR protocol.

The third visit was scheduled three days after the second. The client arrived for the third visit with a great smile on her face. She reported that her arms were sore but that she was able to lift them about 80%.

I then began the treatment by palpating the area. This time her response was a feeling of soreness but she had almost no pain. I then repeated the same protocol as described in the second treatment. After this treatment was completed, I palpated the area and tested her ROM. She reported no pain and felt the strength to continue to move her arms. She had 100% ROM. We scheduled another follow-up session a week after the third treatment.

Since her initial visit, she has reported that she no longer has shoulder pain, and she is now in a stable condition. 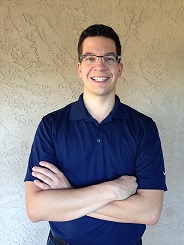 Daniel Lopes, CMT graduated from Carrington College (former Apollo College) in Mesa, Arizona. He went on to become a Certified and Licensed Massage Practitioner and is an active member of the Arizona Chapter of American Massage Therapy Association (AMTA). He also received a bachelor degree from Arizona State University focus on Health Sciences. He worked in various settings such as resort/spas, physical therapy, chiropractic and has had the privilege to volunteer with Ironman triathletes.
Daniel’s company, ProActive Wellness Massage LLC, was established in 2010. It is a clinical massage therapy practice in Mesa and focusing on Medical Massage.