THE IMPORTANCE OF HEMATOMA READING

The correct reading of hematoma by the practitioner is the first critical step to successful rehabilitation of the soft tissues after trauma. Sometimes hematoma and the way it spreads through the soft tissues presents a challenge. Recognizing the importance of this subject and absence of its coverage in majority of clinical sources, we’ve even included this topic as a separate subject of hands-on training in our Medical Massage Certification Program. Here is a patient from our clinic whose case illustrates the importance of correct hematoma evaluation.

A 75 year-old semi-professional team roper who competes regularly, came to our clinic complaining about acute pain on the lateral surface of the right knee, severe restriction of flexion and restricted extension. He limps while walking and visually is in pain.

He said that a week ago during competition he pulled muscles inside of the thigh while he was riding on his horse and it made a sudden turn. He continued to compete all day. When he got home he felt moderate discomfort inside his thigh, but instead of resting he worked with horses and on his tractor. The next morning, he felt tightness in his adductors and noticed black and blue on the medial surface of the thigh, which grew prominent in the next few days. However, the pain on the medial surface of the thigh didn’t bother him much, but instead pain on the lateral surface of the right knee got progressively worse and visual discoloration of black and blue eventually formed there. The pain intensity forced him to stop riding and even regular walks became a problem.

What really surprised him was that he had not traumatized his lateral knee and symptoms there started to appear almost 3 days after initial trauma of the medial thigh. We pressed him to remember if he felt any trauma to the lateral knee, but he insisted that nothing happened there. Fig. 1 illustrates the clinical picture of hematoma on the lateral surface of the knee and on the medial thigh. 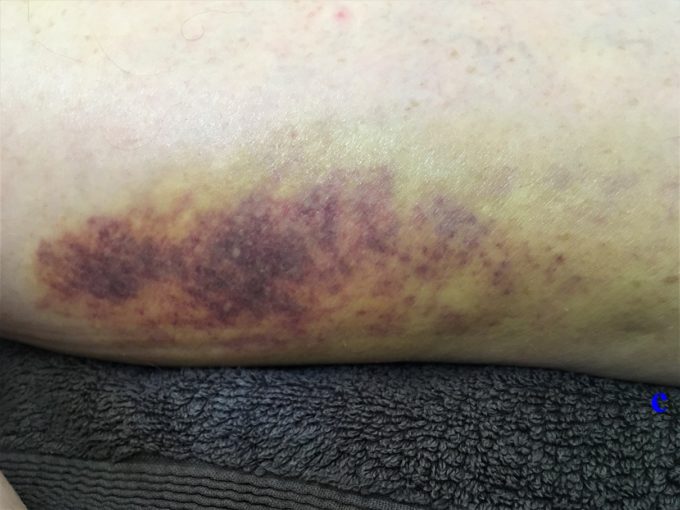 Fig. 1. Hematomas in our patient

How did a patient with a traumatized medial thigh end up with lateral knee pain and hematoma which became way more intense compared to the area of initial trauma? Please examine Fig. 1 to observe the pattern of hematoma distribution. If you look closer you’ll see that besides the initial hematoma on the medial thigh it is also registered on the medial aspect of the knee, very faintly on the posterior thigh just above popliteal fossa and very prominently on the lateral knee. The picture was taken with an iPhone and it didn’t fully catch the discoloration of the skin on the posterior knee, but it is very faintly present on the picture while it was more visible clinically.

Now let’s recreate the chain of events which were responsible for the entire clinical picture. During the roping, his horse made a sudden lateral move and the patient pulled his adductors. He continued to ride and blood from damaged capillaries in the adductors continued to leak into the surrounding tissues. The shape and downward direction of hematoma on the medial thigh justifies that (see Fig. 1 ‘b’).

Since damaged muscles continue to contract they don’t let damaged capillaries be sealed by coagulated blood and blood continues to leak into the tissues. The force of gravity should take blood all way to the medial knee, but soft tissues in this area as well as in lower part of the medial thigh were compressed against the saddle and the horse side. Therefore, only a small hematoma was visible on the medial surface of the knee.

If blood leeks into the tissue, but it is unable to saturate the medial aspect of the thigh and knee, it is supposed to go somewhere. And it does – force of gravity pushes blood into deep fascial septae. While the patient rode, blood from damaged capillaries continued to spread through the fascial septae of posterior aspect of the lower thigh just above the knee and all way to the lateral side of the knee where it stopped because the iliotibial tract is a much harder tissue and it didn’t let blood spread further. So, the hematoma accumulated at the lower part of the IT band, especially at its insertion into the tibia and fibula. Fig. 2 illustrates the pattern of blood distribution from a damaged capillary network in adductors. 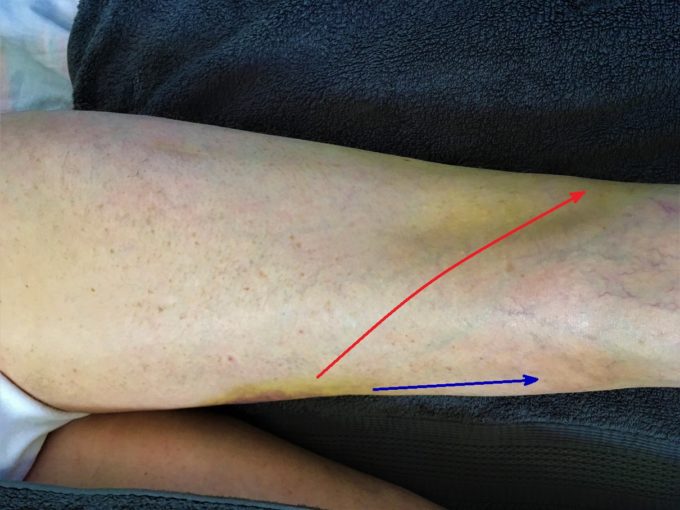 Blue arrow – direction of lesser drainage to the medial knee

Red arrow – direction of main drainage to the lateral knee

The IT band stopped further blood spread, but it created a new clinical challenge. If hematoma forms on the medial thigh and tissues there are swollen, the patient will feel moderate discomfort since there is always extra room for hematoma to spread between muscle fibers, subcutaneous tissue, skin, etc. The lateral side of the knee is a completely different story. The extra pressure in the soft tissues created by newly arrived blood doesn’t have any extra room since the IT band is very strong aponeurosis and the pressure which built up under and within it will trigger acute pain on the lateral knee and it is going to greatly increase with knee flexion especially approaching 100 degrees.

At the same time deep saturation of hamstring muscles by the blood leaking from adductors shortened the hamstring muscles and that was the reason for the restriction of extension at the very end of it at 170 degrees. This is exactly what our patient experienced.

The correct evaluation of hematoma allows formulation of the best treatment strategy. In this particular case it started with Lymphatic Drainage Massage (LDM) along the pathway the hematoma initially spread through the tissue. It doesn’t make sense to apply LDM from the lateral knee strictly upward since the IT band won’t allow optimal drainage and using already established routes in combination with upward strokes gives better clinical results. See Fig. 3 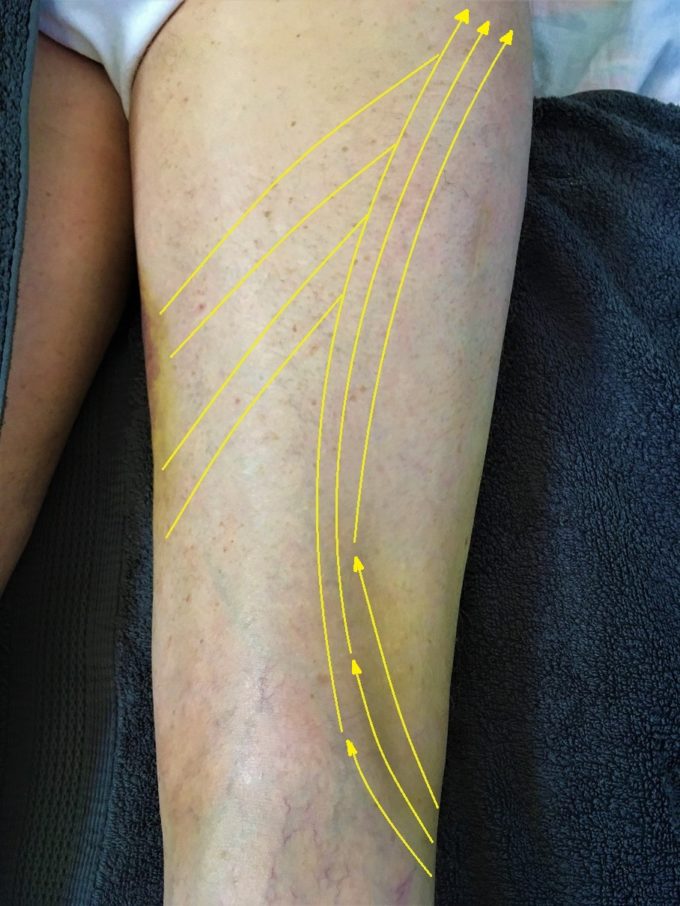 Fig. 3. General direction of LDM strokes for our patient

The next step was to heal the site of initial injury to the adductors. It was done by a combination of fascial work, kneading in the inhibitory regime, frictions along and later across injured fibers with later introduction of Postisometric Muscular Relaxation to restore anatomical length of traumatized muscles. It took us two weeks to completely restore function and the patient went back to roping events and he plans to win the yearly team roping competition in Las Vegas in December.

1. Correlate the patient’s complaints with detailed examination and mapping of hematoma. Consider type of activity at the time of trauma and impact of the force of gravity as contributing factors to spread of hematoma.

2. Pay attention to color, shape and hematoma distribution. It will help you to understand how the force of gravity and muscle contractions played a role in blood spread from the damaged capillaries.

3. Remember that what you see in the skin is only consequence. The real damage is much greater and deeper since the initial damage is now combined with secondary damage of the tissues due to the blood saturation.

4. Rubbing back and forth along the hematoma will delay recovery since the body works tirelessly to remove blood from the soft tissues and incorrect direction of the strokes will greatly slow down this process by interfering with the drainage of waste products. Thus, all strokes MUST have direction along the drainage with ‘feathering’ while hands are coming back to the starting position.