This Case of the Month is an outstanding contribution. I hope that readers will greatly appreciate this story of professional success. This contribution illustrates how far the massage practitioners can go to help clients if they have the right tools and scientifically based protocols.

In his initial e-mail Juan informed us that he plays the videos from the MEDICAL MASSAGE PROTOCOLs in his therapy room while he works on his clients. This is the exact way we envisioned usage of our Video Library. This submission is a great example of science of massage at work.

Client is male, 44 years old and he works as a contractor in the construction business.

The first clinical symptoms appeared 18 months ago in his lower back, both lower extremities (especially on the left one) and later on the neck and left upper extremity as well. The intensity of the clinical symptoms varied depending on the level of the stress and daily workload.

Previously he has had a three left knee surgeries to restore anterior cruciate ligament. His last surgery was in 1993.

The patient was depressed because of the intensity of the pain and a significant decrease in the range of motions. He had difficulties in bending and picking up any object and even getting up from the bed. He said that he felt like a very old man. The constant pain wore him out to the degree that he didn’t have enough energy for all of the work he needs to do in his business. He has used strong pain medications for the last 18 months.

At the beginning the pain appeared during long rides in a car. Later the client started to feel intense pain for entire day. The mornings were especially difficult due to very intense stiffness and muscle weakness in the lower back.

1. Examination of the lower back.

The Sensory Test exhibited a sensory deficit along L4-L5 dermatomes, especially on the left side. The evaluation of the skeletal muscles showed the active trigger points in lumbar erectors and quadratus lumborum muscles. The client estimated the intensity of the lower back pain around 9-10 on the scale of 1 to 10.

He also complained about cramps in the gastrocnemius muscle on both sides, on the plantar surface of the left foot and pain in the area of left Achilles tendon. The client did not sleep well and usually woke up several times per night. During initial examination the pain radiated along the L4-L5 dermatomes.

He also exhibited signs of the peripheral edema on both legs and feet. Edema was especially prominent on the left leg.

2. Examination of the neck.

The client felt numbness and pain on the left forearm and hand. Pain radiated to the left arm with sensory deficit in sensory alarm areas of the C6,C7 and C8 dermatomes. Also the client noticed a headache.

The Sensory Test showed the sensory deficit along the distribution of the radial and ulnar nerves. The Motor Test showed significant weakness on the left forearm and hand, especially the hand and thumb prehension.

Sessions 1-2 (Every other day)

During the second session I added the MEDICAL MASSAGE PROTOCOL for theCervicocranialgia to balance Sympathetic and Parasympathetic divisions of autonomic nervous system and reduce the intensity of the headache.

After the first two sessions the patient felt great relief from the pain, especially in the lower back. On the scale of 1 to 10 he felt the pain was around 5 in the lower back and around 8 in the neck. During the first session the client needed the assistance to get on the table and has a lot of difficulties in undressing himself. After first two sessions it was not the issue anymore.

After the 4th session the client mentioned that the lower back pain was down to 3 from the previous 5 level. He was able to get on and off the table easier, undress without help and when I palpated the lower back area the intensity pain and tension in the lumbar erectors and QL muscles significantly decreased. I recommended to him some light repetitive exercises, to do the back stretches and recommended him to walk 25 or 30 minutes every other day.

The headache disappeared, but the cervical pain and its radiation to the upper extremities was on the same level of 8.

Considering that the client still had cervical pain with continued radiation I decided to concentrate on the posterior and anterior neck. I used MEDICAL MASSAGE PROTOCOL for the Anterior Scalene Muscle Syndrome (7th and 8th sessions) and later added the protocol for the Ulnar Nerve Neuralgia (9th session).

After the 9th session the patient felt great relief from pain and a restoration of muscle strength. The Motor Test showed equal force of hand prehension on the left and right. He still felt a moderately uncomfortable sensation during palpation of the area of trigger point in the ASM.

I started treatment with a re-evaluation of all areas. To address the residual symptoms on the upper extremity I used MEDICAL MASSAGE PROTOCOLs for theAnterior Scalene Syndrome, Radial Nerve Neuralgia and Ulnar Nerve Neuralgia.

At the end of the 14th session the pain and numbness on the left forearm and hand had disappeared and normal sleep had been restored. The client got his energy back and he hadn’t taken any medications.

Today 85% of the original clinical symptoms are gone. He still has mild pains on the anterior and posterior surfaces of the left forearm along C6,C7 and C8 dermatomes, along with some muscle weakness on the left forearm and hand. The symptoms continue to fade away.

Currently I see the patient every 30 days to maintain what we have gained. I recommended to the patient to change some everyday habits, like long driving (more than 1.5 hours) without rest, and stretching, long work on the computer, etc. 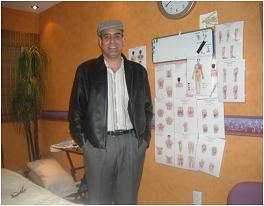 Juan Luis Ordaz Sabag, LMT graduated from Veterinary University in Mexico 1987. For more than 16 years he worked as a veterinarian for Tyson Food Corporation. However massage and bodywork was his passion and he has been studying massage therapy since 2001. Finally he decided to change his profession and dedicate all his time to help people in pain.
He used different techniques from books, DVD(s) to help his clients who suffered from pain and other somatic abnormalities. He combined Reflexology, Therapeutic Massage, Reiki, Chair Massage, Vojta, and acupressure.
For the last 6 months Juan started a deep study of the MEDICAL MASSAGE PROTOCOLs from the Medical Massage textbooks and Video Library. Since then he uses MEDICAL MASSAGE PROTOCOLs daily with excellent results. In six months he was able build up a very successful practice in the medical massage field. Juan lives in Torreon, Mexico with his wife and two sons.
His hobbies are Latin Dance, singing, playing guitar and skating.