by P. Novakovic, MD
PART I: ANATOMY AND PHYSIOLOGY OF PIRIFORMIS MUSCLE (PM)

PM is a key to the lower extremity. Association of the PM with sciatic and other nerves in the gluteal area make PMS a very frequent pathological condition. As a matter of fact every abnormality on the lower extremity starting from the thigh down to the foot (from active trigger points in hamstring muscles to Plantar Fasciitis) may be directly connected to PMS.

This article consists of three parts. Part I will review the anatomy and physiology of PM, Part II will present the evaluation of the patient with tension in PM and Sciatica and Part III will show the entire MEDICAL MASSAGE PROTOCOL in cases of PMS.

The PM originates inside the pelvis on the anterior surfaces of the sacrum and the sacro-iliac joint, exits the pelvis via the greater sciatic foramen, and inserts into the greater trochanter (see Fig. 1). 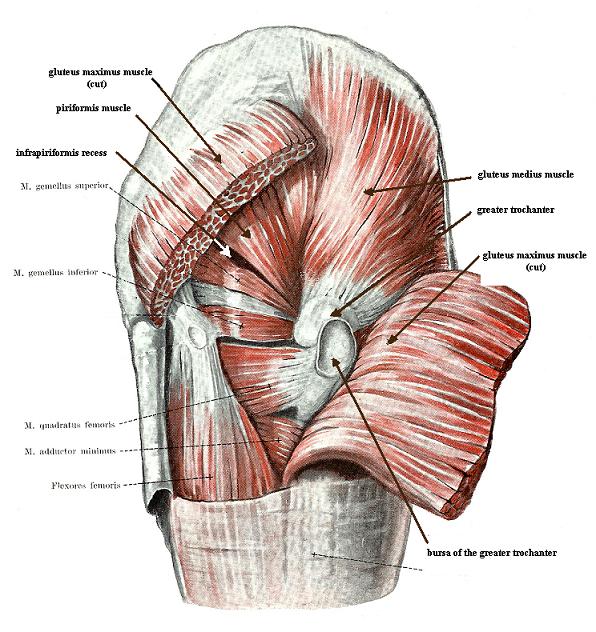 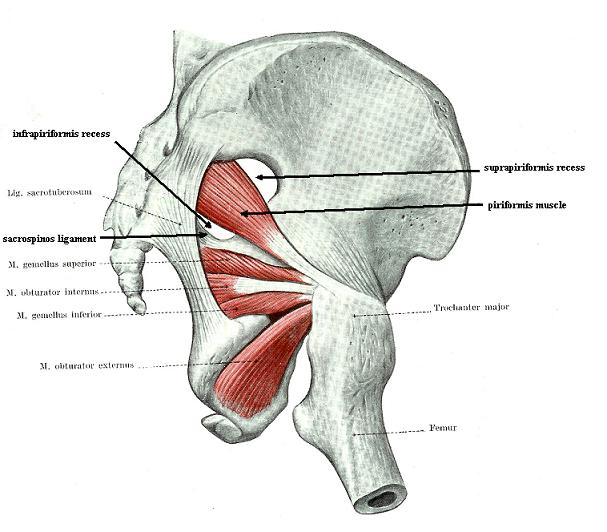 b
Fig.1. Anatomical arrangement of the PM 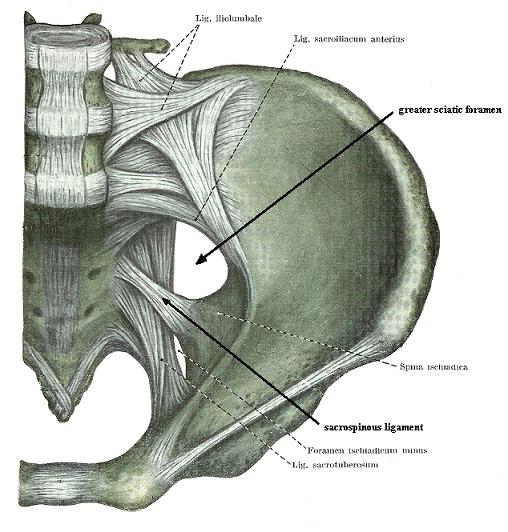 In some individuals especially those who build up the PM in gym or during a professional sports career the PM may occupy the entire greater sciatic foramen to the degree of eliciting pressure on neurological and vascular structures located in this anatomical opening (Ripani, et al., 2006). The PM receives motor innervation from the S1-S2 spinal nerves.

The PM participates in the abduction and lateral rotation of the hip joint. The gluteal muscles, including the piriformis and quadratus lumborum muscles, are key players in our ability to walk upright. Every time we lift a foot to take a step, the opposite side quadratus lumborum muscle binds together the thoracic cage with the pelvis, and at the same time the entire gluteal group stabilizes the hip joint. With such simultaneous action, the opposite side of the body becomes a rigid structure which acquires enough stability and balance to resist the force of gravity while we are finishing the step and are on both feet again.

The PM has one more unique biomechanical characteristic. It is able to elicit direct pressure and rotation force on the sacro-iliac joint (Retzlaff, 1974). This fact greatly contributes to the tension in the SI joint and lower back pain {forms} as a result of Sacroiliitis.

PM AND ITS RELATION TO THE NEURO-VASCULAR STRUCTURES

The PM is an absolutely unique muscle in our body, because of its complex relation with many important nervous and vascular structures in the pelvis and gluteal area. The tension in the PM may affect following structures.

As we discussed above, the inner third of PM is located inside the pelvis. In the place of origin (anterior surface of the sacrum and SI joint) the PM forms a cushion for the sacral plexus especially to S2-S3 spinal nerve roots (Russell et al., 2008). This plexus is the origin of many nerves (i.e., sciatic, gluteal inferior, cutaneous posterior, etc.) which innervate the pelvic inner organs, the gluteal area, and the lower extremities. Fig. 3 presents the anatomy of the sacral plexus and its relation to the PM borders which are emphasized by solid red lines. 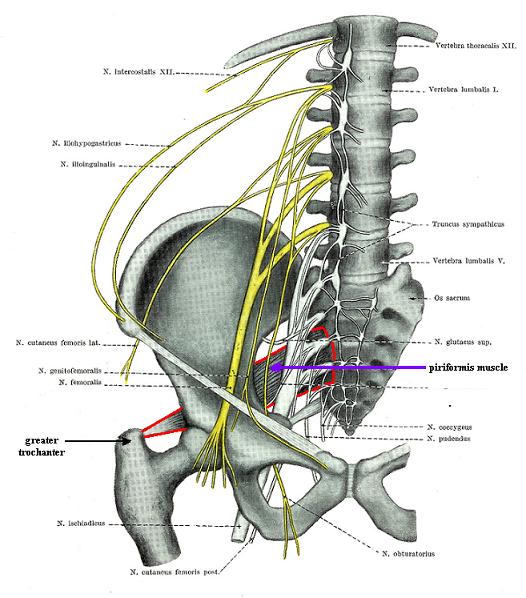 The clinical signs of the irritation of the sacral plexus by the PM is a unique combination of the lower back pain, peripheral symptoms in the lower extremity and variety of visceral symptoms (e.g. constipation, intense menstrual pains, erectile dysfunction, etc.). 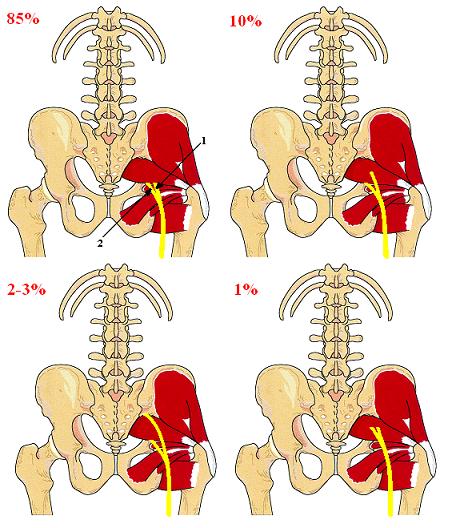 As you may see from Fig. 1 the common peroneal portion of the sciatic nerve is more frequently in trouble. This is why patients with PMS are more likely to develop sensory and motor abnormalities within the distribution of the common peroneal nerve (Lee and Tsai, 1974; Limansky, 1988). However, both portions or only the tibial nerve portion can be entrapped as well. For those patients, the clinical picture of Sciatic Nerve Neuralgia is much more intense and they struggle with constant flare ups during their entire life.

Clinical importance: irritation of the gluteal nerves is accompanied by the formation of the active trigger points, protective muscle tension and weakness in the gluteal muscles.

The clinical sign of the inferior gluteal nerve neuralgia is weakness or complete inability (in cases of complete palsy) to get up from the seated position.

The clinical sign of the superior gluteal nerve neuralgia is an unusual rolling gait. Every time one raises foot on the unaffected side to make a step the half of the pelvis on the affected side slightly goes downward instead of being on the same level. The rolling gait is especially visible if the examiner gets on one knee to bring his or her eyes to the level of the patient’s pelvis and asks the patient to walk slowly while observing the gait from the back and comparing both sides.

Clinical importance: irritation of the pudental nerve is a direct cause of sexual dysfunction in men and women (e.g., erectile dysfunction, dryness of vagina, pain during intercourse, etc.) and sensory abnormalities (e.g. tingling, numbness) on the posterior thigh.

The goal of Part I of this article is to illustrate the fact that PM is a critical player in the human body and any, even the slightest pathological changes in its function causes a rich neurological picture in the pelvis, gluteal area and in the lower extremities. In other words, the PMis a key to the pelvis and lower extremities and the practitioner’s ability to handle the tension in the PM greatly contributes to the overall success of the therapy of variety of somatic and visceral symptoms in the lower back, pelvis and lower extremities.

Part II of this article in the next issue of the Journal of Massage Science will cover evaluation of the client with tension in the PM and symptoms of Sciatica.