We didn’t receive interesting submission to the Case of the Month for this issue of Journal of Massage Science. However we don’t want readers to miss the potentially important practical information from this section. This is why we decided to share with you interesting case from our clinic.

Originally the patient was treated at our clinic 3 years ago for the Lower Back Pain and Sciatic Nerve Neuralgia as a result of tension in the piriformis muscle. His initial symptoms were on the left side and consisted of intense lower back and gluteal pain which radiated to the left leg and to the top of the left foot. His treatment was successful and he came in periodically for supportive sessions.

In January of 2010 he noticed a tingling on the left side of the penis head. Initially he didn’t pay attention because he had a lot of personal issues to deal with. In a course of a month he noticed the spread of tingling along the shaft of the penis while the head started to feel numb. He went to his family physician who ordered several tests and all were normal. His family doctor sent him to see a urologist. While waiting for the appointment for the urologist he noticed a decrease of the blood flow during the erection. The patient became greatly frustrated. Urologist didn’t find any pathological abnormalities and recommended him to see a neurologist and prescribed Viagra. The medication restored the blood flow but there weren’t any changes in the decreased sensitivity.

Further examination and almost a month of tests by neurologist didn’t reveal any abnormalities. Considering emotional stress of divorce the neurologist concluded that the patient suffers from so-called conversion disorder. In such cases, the emotional or psychological problems the patient experienced converse into various somatic of visceral abnormalities. His advice was to continue to take Viagra and the condition would normalize by itself after his family issues had been resolved.

Initially the patient became optimistic but soon the clinical picture dramatically worsened. The medication wasn’t able to maintain the blood flow and tingling and numbness spread to the scrotum. At this point he decided to visit our clinic because he had became greatly frustrated and was desperate for help.

The patient seemed depressed, anxious and exhausted. He almost cried when he said that he considers himself impotent. He also said that he became obsessed with his situation to the degree that he started to have problems with sleep.

The patient didn’t complain about any significant lower back pain. He felt tightness of the hamstring muscles. He also noticed an uncomfortable sensation of heaviness in the area between the anus and root of the penis. He felt constant need to change position while sitting in a chair otherwise these sensation became very uncomfortable.

During examination of the lower back he exhibited a positive Withdrawal Sign when moderate pressure was applied in the area of the left sacro-iliac joint. There was lesser intensity of pain at the insertion of the tendon of the lumbar erectors into the sacrum.

The overall muscle tone of the hamstring muscles on the left side was significantly higher when compared to the right side. However there weren’t any trigger points detected.

Considering his history of the lower back pain and sciatica we decided to approach his condition using a combination of MEDICAL MASSAGE PROTOCOLs for the Lumbalgia (i.e. lower back pain) as a result of tension in the lumbar erectors and Sacroiliitis.

We also recommended that the patient actively stimulate skin in all areas with decreased sensitivity. The patient started to use intense friction, pinching, compression, electric vibration and alternate application of ice and heat to all affected areas on the penis and scrotum.

The blood flow continued to improve and he was able to achieve erection without taking Viagra or Cialis. However he felt he needed to take medication because he still had problems with maintaining an erection during intercourse.

The patient mentioned that the sensation of the heaviness inside of the pelvis is not getting better. Considering that this sensation was more likely to be a result of tension in the pelvic floor diaphragm we taught the patient to use modified Kiegel’s exercise twice daily.

The blood flow completely restored and the patient didn’t feel numbness in scrotum. However the numbness along the shaft of the penis and especially the head didn’t change at all. The patient was able to maintain an erection without medication but he felt that he didn’t have satisfaction because half of the penis remained numb. Also, the sensation of heaviness disappeared after self-application of modified Kiegel’s exrecise.

Despite all of our efforts the sensitivity along the penis didn’t improve a bit. Considering the lack of the progress in this area at the beginning of the 10th session we decided to re-examine current clinical symptoms and adjust the treatment protocol.

Re-examination showed that the patient didn’t have original clinical symptoms in all areas of lower back and scrotum. However the detailed examination of the left gluteal area revealed unusual clinical symptoms. The application of the direct pressure along sacrotuberous ligament and especially in the area of the pudendal canal immediately increased the intensity of the symptoms along the shaft and head of the penis. Now the increased tone of the hamstring muscles became a very important factor in the treatment. 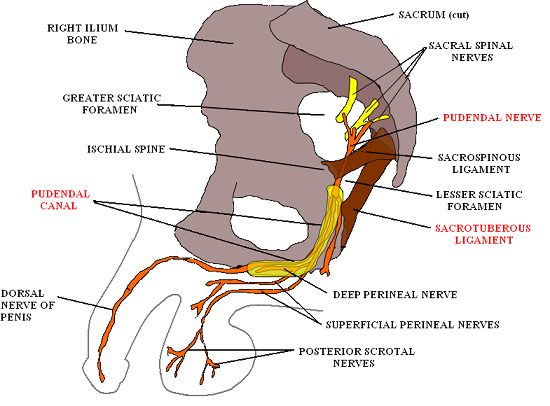 The pudendal nerve which is also called ‘king of perineum’ originates from S2-S4 spinal segments and it splits from the S2-S4 spinal nerves just before they enter the sacral plexus (see Fig.1). After that the pudendal nerve exits the pelvis via the infrapiriformis recess medially to the sciatic nerve (see Fig. 2), and almost immediately it enters the pelvis again through the lesser sciatic foramen and after this the nerve gets into the pudendal canal (see Fig. 1 and Fig. 2) located along the medial surface of the obturator internus muscle. 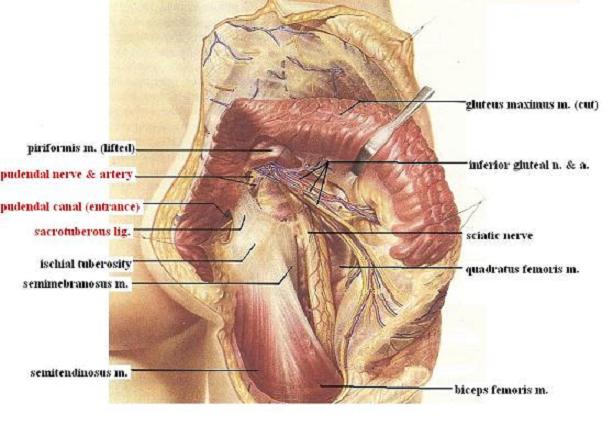 1. Work on the hamstring muscles to restore their normal muscle tone.

It helps to decrease tension in the sacrotuberous ligament and assist in the decompression of the pudendal nerve. We used combination of kneading in the inhibitory regime, longitudinal and cross fiber friction, passive stretching and postisometric muscle relaxation.

2. Work in the gluteal area

The goal is to decrease tension in the gluteus maximus muscle and especially the piriformis muscle. We partially used the protocol for the Piriformis Muscle Syndrome.

3. Work on the sacrotubeous ligament and at the entrance to pudendal canal

The final part of the session targeted the sacrotuberous ligament. The intensity of all applied techniques was correlated with the patient to prevent any possible traumatization of the pudendal nerve during the treatment. Friction along and across the sacrotuberous ligament, permanent, fixed electric vibration, local stretching of the ligament as well as general passive stretching of the left lower extremity were used.

The video below shows the application of the friction along the sacrotuberous ligament. The purpose of this video is to guide the practitioners to the area of pudendal nerve decompression.

Decompression of the pudendal nerve was the final piece of the puzzle which allowed us to completely restore sensitivity along the left side of the penis. Currently the patient visits our clinic once a month for supportive therapy. He also uses an inversion table and stretches of the lower back regularly and he doesn’t have any episodes of decreased blood flow or sensitivity.

We observed positive results during the last three months. After several months of stress and misery the patient completely recovered and it took only 13 sessions of medical massage therapy to obtain stable clinical results and give the patient his life back.

How did all of this happen? Here is the most likely scenario of abnormality.

The patient had chronic lower back problems which eventually caused tension in the hamstring muscles on the left. This tension affected the sacrotuberous ligament which irritated the pudendal nerve in the pudendal canal with following pathological changes in the sensory and motor innervation of the perineum.

What treatment options does modern American medicine offer a patient with Pudendal Nerve Neuralgia? To answer this hypothetical question we will go to a recent complimentary medical source on this subject; Genitourinary Pain & Inflammation. Diagnosis & Management.

First of all, the manual decompression of the pudendal canal is not even mentioned despite the fact that this is a routine medical massage procedure in many countries. The only two options described are (Antolak, 2008):

A set of three monthly cortisol injections is recommended. Two under the sacrotuberous ligament with the last one into the pudendal canal itself. This treatment is successful in 70% of cases during the first six months (Bensingnor et al., 1996). Afterwards, some patients start to exhibit similar symptoms and the treatment is usually repeated.

Another problem concerns the last (third) injection, because of the frequent complication in using this procedure; it may cause additional damage to the pudendal nerve. Because the injection needs to be done into the pudendal canal and the nerve tightly fits the canal, even modern diagnostic equipment doesn’t protect the physician from injecting medication into the nerve itself. This greatly increases the time of recovery. This is why cortisol injections for Pudendal Neuralgia are practiced in a relatively small number of clinics.

Surgical decompression of the pudendal nerve is also a questionable procedure. ‘Thirty to forty percent of patients fail to have significant relief following the surgical intervention’ (Antolak, 2008).

Another quote (from www.chronicprostatitis.com) states “Many people who have decompression of the pudendal nerve surgery are still in great pain years later. Only a small handful of doctors will do this operation. It is not mainstream medicine. The operation costs US$25K-$40K and most insurances will not cover it”.

A couple of final thoughts. Medical massage saved our patient a great deal of money and precious time within his personal life. Thus, manual decompression of the pudendal nerve is a first and a must-do step in the treatment of Pudendal Neuralgia. Only after it fails should other more invasive treatment options be considered.