PART I: ANATOMY AND PHYSIOLOGY

Temporomandibular Joint (TMJ) dysfunction is a widely publicized medical condition. Public as well as health practitioners are overwhelmed by countless articles in both professional and media publications which discuss this abnormality and various treatment options.

Indeed, TMJ dysfunction is a very frequent abnormality and more than 20% of the American population exhibit different degrees of TMJ symptoms (Morgan, 1996) and this condition appears to be more common in women than men.

However, the clinical reality is less grim than it may appear at first look. For many patients the diagnosis of TMJ dysfunction does not automatically mean invasive therapy indeed sometimes treatment isn’t needed at all. Additionally TMJ dysfunction is a very frequently misdiagnosed and consequently mistreated condition.

Ironically enough, the subject of TMJ dysfunction and treatment is one of the most examined and still controversial subjects in dentistry. I may quote Dr. Greene (1980) who examined the evolution of TMJ dysfunction concept in modern dentistry and concluded that: “Rarely in the history of dentistry have so many labored for so long, only to end with such extreme disagreement”. This article will give our readers comprehensive outlines of TMJ dysfunction and discuss treatment options the patients have. In the first part I will review the anatomy and physiology of TMJ.

The TMJ is a hard working joint. The average person opens and closes the jaw about 2000 times per day. The TMJ is formed by the mandible or lower jaw and temporal bone (see Fig. 1). The TMJ is a very unique joint because it contains an articular disk (see Fig.2) placed between the mandible and temporal bone which form the TMJ. This fibrocartilaginous disk greatly reduces friction between both articular surfaces and protects the hard working joint from wear and tear. Despite their differences we can observe a parallel between the anatomical arrangement of TMJ and knee joint where meniscus serve the same purpose of extra cushion and protection of the articular surfaces.

Another equally important function of the articular disk is its role in the greater flexibility of the TMJ which allows a significant range of motion. The articular disk is attached to the mandibular condyle of the mandible and follows the movements of the lower jaw during chewing or talking. Thus freedom of movement of mandible without any obstruction is a most important factor in the normal function of TMJ.

Another important concept which needs to be considered during the evaluation and treatment is a bite. The upper jaw forms the facial skeleton and it is a fixed anatomical structure, while the lower jaws has great mobility. Thus the bite is the arrangement of the lower and upper teeth against each other and it reflects the position of the lower jaw in regard to the upper jaw. The bite is unique for each person and may slightly change with age. A healthy functioning bite is one in which the person is totally unaware of the bite.

During chewing we are able to slightly change the bite by adjusting the lower jaw according to the amount and structure of the food. These changes are possible because of the great flexibility of the TMJ and complex anatomical arrangement of the masticatory muscles and their precise biomechanical interactions.

The posterior teeth as a group support the normal bite. This is why the excessive clasp of the posterior teeth or so-called posterior bite increases the pressure inside of TMJ especially on the articular disk and triggers the spasm in the masticatory muscles. The excessive wear, hypermobility or absence of posterior teeth are equally important factors which contribute to extraoral symptoms including the TMJ dysfunction (Oral et al., 2009). Fig. 1 illustrates general view of TMJ. 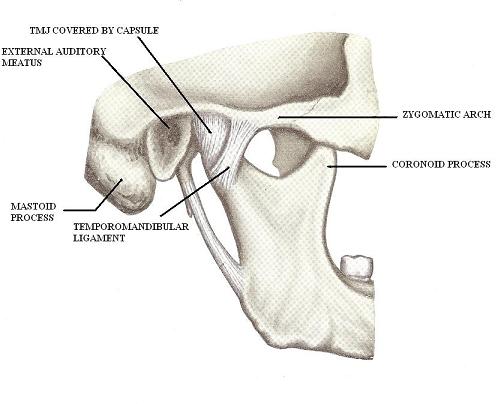 Fig. 2 presents the anatomical orienteers in the area of TMJ 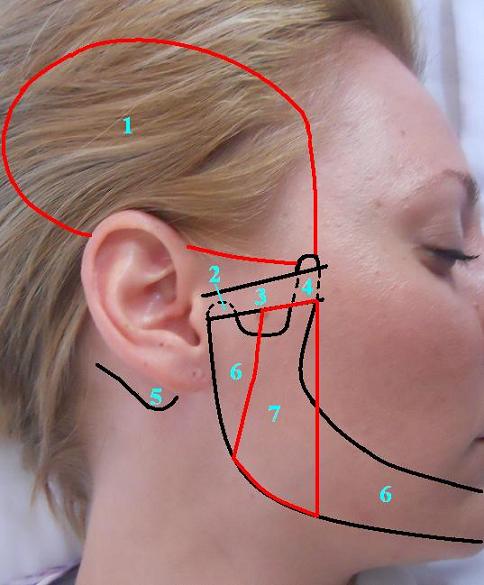 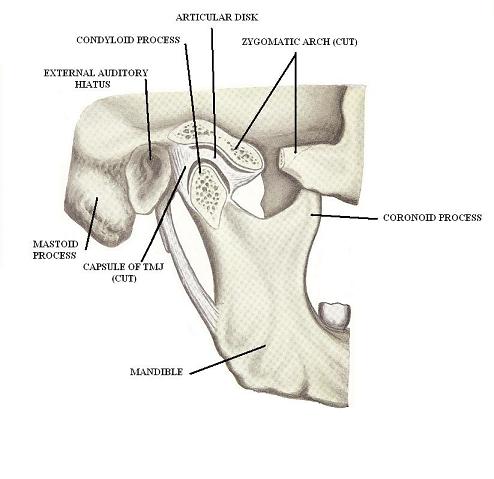 The anatomical arrangement and function of masticatory muscles is a very important subject for the practitioner. The spasm in the masticatory muscles is a direct cause of pressure on the articular disk inside TMJ (Inoue et al. 2010). The evaluation of the lower jaw position and individual assessment of each masticatory muscle during the patient’s examination allows the practitioner to develop a quick and efficient treatment protocol. Thus the information presented below has important practical value and it is vital for understanding and implementing the second and third parts of this article.

The masseter muscle is arranged in two layers: superficial and deep. They both start from the zygomatic arch but insert into the mandible into slightly different areas: the superficial layer attaches into the inferior part of the mandibular ramus while the deep layer inserts into its superior part. Fig. 4 illustrates the anatomical location of the masseter muscle. See also Fig.2. 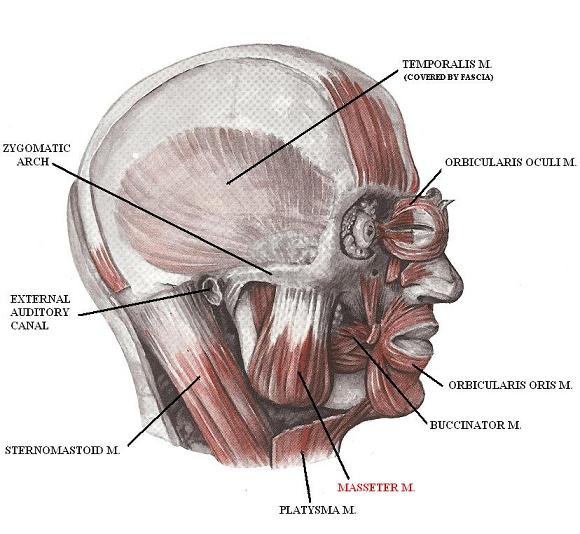 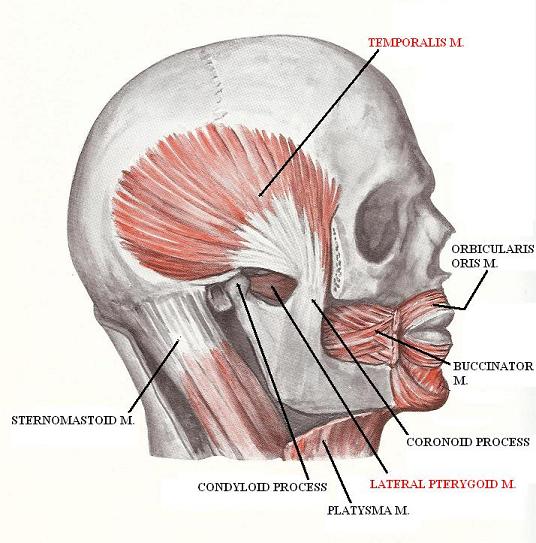 The ability of the LPM to pull the articular disk forward when the mouth is closed is very important for the normal function of TMJ. By pulling the disk forward the LPM keeps it from smashing between both articular surfaces of the TMJ. Failure of the LPM to do it quickly during the sudden lift of the lower jaw may entrap the articular disk and smash or even fracture it. Fig. 6 illustrates the anatomical location of lateral pterygoid muscle. See also Fig. 5. 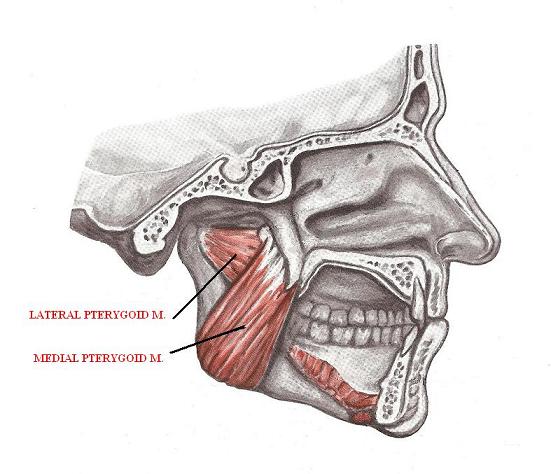 Masseter and MPM form a hammock which supports the lower jaw: the masseter muscle is on the outside while MPM is on the inside of the lower jaw. Fig. 5 illustrates the anatomical location of the medial pterygoid muscle.

The digastric muscle participates only in the forced opening of the mouth when the lower jaw must be farther pulled down (e.g. during oral examination). Also this muscle is a very important participant in swallowing and coughing. Fig. 7 illustrates the anatomical location of the digastric muscle. 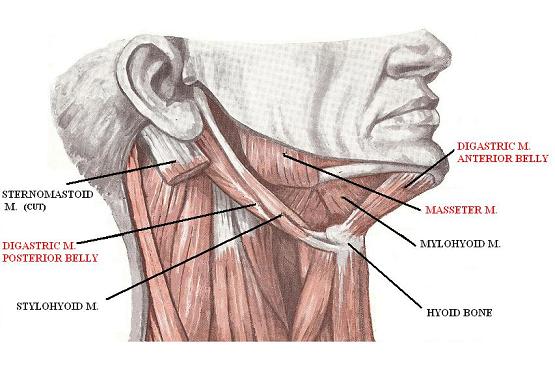 In Part II of this article, in the next issue of JMS, we will discuss the clinical symptoms and the evaluation of a patient with TMJ dysfunction.

Dr. Bipar has an unusual background for a physician. He graduated in engineering from Lousiana State University in 1981 and worked as an engineer for Exxon Mobil. In 1989, he enrolled in the Dental School of the University of Texas and graduated in 1993 as a Doctor of Dental Surgery. He later obtained degrees as a Doctor of Periodontics and Implant Surgery, and Plastic and Reconstructive Surgery.
Dr. Bipar’s unique combination of medical and engineering backgrounds helped him to become one of the world’s most recognized dentists and oral reconstructive surgeons. In 2009, the American Research Council recognized him as among the top ten dental surgeons in the United States.
Dr. Bipar is a member of the American Dental Association, as well as the International Academy of Periodontics. He teaches at the Arizona Dental School and actively lectures worldwide on behalf of the International Academy of Periodontics.
Dr. Bipar uses many modalities for his patients, including medical massage, as a part of an integrative protocol in the treatment of temporomandibular dysfunction, neuralgia of cranial and peripheral nerves, etc.
He lives in North Scottsdale, Arizona, with his wife and two children. His hobbies are sports, cars and travel.