MEDICAL MASSAGE VS THE “SILENT KILLER”

We think that this case is an excellent example of how the body sometimes misleads even highly trained health practitioners. As you will read below, the MRI confirmed that the patient has severe damage to rotator cuff but this damage as it was stated by roentgenologist to have occurred sometime before. However, the presence of the damage to supraspinatus muscle was seen as justification for shoulder surgery, which was completely unnecessary in this case. As was correctly detected by Bojo Shestich, LMT, MMT, the patient’s anterior scalene muscle slightly irritated part of the brachial plexus, which gives origin to the axillary nerve, and it was the real cause of his shoulder pain. This case greatly illustrates that the anterior scalene muscle, which has the nickname “the silent killer” may trigger any possible symptoms on the upper extremity that, from the first look, seemed completely unrelated since the patient did not complain about any pain on the neck.

MEDICAL MASSAGE VS THE “SILENT KILLER”

The patient is a 67-year-old retired truck driver. He regularly competes in team roping. He is a lifetime body builder with very well developed muscles. During the summer of 2011, the patient came into the office with acute pain in the right shoulder and restriction of ROM.

Four months before his first visit to our clinic, the patient started to feel pain in the right shoulder especially after roping practice. Initially, he did not pay any attention, but the intensity of the pain increased, and it started to bother him even during the day. He also noticed that he had difficulty falling asleep because of the pain at night. When he noticed that the pain interfered with his roping, he went to his family physician who prescribed pain medication and muscle relaxants. After two weeks, the patient’s pain intensity did not change much, and he went through ten sessions of physical therapy. He believed that the physical therapy increased his level of pain, and his shoulder became weaker.

The patient was referred to an orthopedic surgeon who ordered a shoulder MRI. The MRI showed a complete tear of the rotator cuff with 2cm retraction of supraspinatus muscle’s tendon with significant atrophy of the entire muscle’s belly. In his report, the roentgenologist indicated that there was no significant inflammation or edema around the injured tendon and that it was more likely caused by an old injury.

It was suggested to the patient to have extensive surgery to rebuild the rotator cuff and re-attach the damaged supraspinatus muscle to its anatomical location. The patient came to our clinic to find an alternative treatment since he did not want to have surgery but the symptoms greatly affected the quality of his life.

Examination of the right shoulder showed that, indeed, he had acute pain on the lateral side of the right shoulder during active abduction. The pain started approximately at 70 degrees of abduction, and the patient had a tendency to bend the upper body to the left while trying to further elevate his right arm. Also he had acute pain on the anterior shoulder while trying to put his right arm behind his back.

The palpatory examination indicated the presence of active trigger points in the middle and anterior portions of the right deltoid muscle. He also exhibited mild-to-moderate pain on the top of the right shoulder when pressure was applied on the right acromio-clavicular joint.

During questioning, the patient mentioned the pain in the right shoulder sometimes has a burning characteristic. Considering that this indicated a potential nerve involvement, I decided to examine the posterior cervical muscles and anterior scalene muscle. He did not exhibit significant tension in the posterior neck, and the application of pressure on the tip or sides of the spinous processes did not trigger any uncomfortable sensations. However, as soon as I applied Wartenburg’s Test to examine the anterior scalene muscle, the patient “jumped” and said that pain was shooting to his right shoulder and right arm all way to the elbow. In considering my findings, I decided to use the protocol for the Anterior Scalene Muscle to rule out compression of the nerves on the anterior neck by the scalene muscles before I began work on the shoulder itself.

For the first three sessions I used the Anterior Scalene Muscle protocol from the Video Library. After the first session, the patient noticed a significant increase in pain intensity and felt horrible. He was reluctant to continue treatment but I convinced him to give the therapy a chance. The second session brought approximately 30% relief in the intensity of the symptoms. After the third session, his ROM in the right shoulder significantly improved (abduction without pain up to 90 degrees).

Starting with the fourth session, I combined the protocol for the Anterior Scalene Muscle Syndrome with the Deltoid Muscle Syndrome protocol. By the end of the seventh session, his ROM was completely restored, and he had no residual pain. In December 2011, he won the championship title in the National Team Roping Event. I periodically work on him for other unrelated issues.

I think that this patient had an old injury and, since he was bodybuilder all his life, he was able to develop and “re-teach” the deltoid muscle to substitute the function of the rotator cuff especially for the severely damaged supraspinatus muscle. 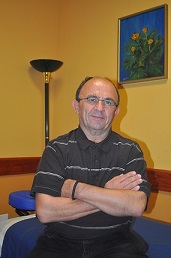 Bojo Shestich graduated from the University of Zagreb, Croatia, in 1995 with a Master’s in Physical Education. In 2002, he obtained an Associate’s in Therapeutic Massage.
In 2007, he obtained a Bachelor’s in Kinesiology from Arizona State University, Tempe, Arizona.
Bojo founded Healing Therapies LLC in 2006, and currently he is in private massage practice working with patients referred to him by family physicians, chiropractors and physical therapists in the Phoenix area.