This case is contributed by Angela Bitting, LMT, from Florida. We think that it is excellent illustration of the great clinical value of medical massage. For 12 years, Angela’s patient had suffered from thigh and knee pain, and all diagnosis and treatments considered the pain itself as the primary problem. A couple of simple tests sent Angela’s thinking in a completely different direction, and, as a result, she was able to diagnose the real cause and successfully eliminate it in three (!) medical massage sessions.

In this article, Angela greatly illustrated the three main principles of medical massage that we emphasize during our seminars: Evaluation is a key to the clinical success; always try to determine the real cause by yourself; and only give up when all clinical opportunities are exhausted.

When you read this contribution, pause for a second and consider how much money was spent on unsuccessful treatments during which the simple solution was apparent but not discovered until Angela, using her newly obtained expertise, diagnosed it. She stepped in and eliminated 12 years of chronic pain from the patient. Each massage practitioner is able to do the same if he or she develops scientifically based, clinical thinking, and has the correct set of diagnostic and clinical tools.

We feel that this and similar cases contribute to JMS justifying all our efforts spent in spreading, among practitioners, the principles of somatic rehabilitation using medical massage based on the clinical science.

The patient presents with radiating pain in the right hip and knee. The activities of daily living (ADL) were painful, she walked with a noticeable limp and had visible atrophy of right quadriceps. Patient reported no lumbar pain.

The patient was physically fit and healthy prior to a car accident in March, 2001, which resulted in a fracture of the right femur. A titanium rod was inserted in the femur and screwed in at the trochanter and lateral epicondyle areas.

The patient’s pain in the knee and right hip began almost immediately after surgery and continued during the entire healing process. In October, 2001, the pain still persisted, and the patient was unable to run or exercise. A knee arthroscopy was performed which found no abnormalities. Her physician gave her no physical limitations regarding exercise, and she started running, however, with pain.

Fast forward to early 2011: The pain has worsened. The patient was diagnosed with “ITB Syndrome, Gluteus Medius/Minimus, Abductor weakness, with Quadriceps Atrophy.” An MRI concluded that the titanium rod was in NO way the cause of her pain. The patient was referred to physical therapy. She gained muscle strength in the right quadriceps but the pain continued to be a limiting factor in her activities.

Massage Round #1: Having trained with Judith DeLany, Tom Myers, Aaron Mattes, Benny Vaughn and many other “clinical” mentors, I approached this patient’s condition using multidisciplinary techniques. The pain would subside for, at most, two to three days following treatment. The patient was on a-once-per-week massage schedule from Sept. 13th through Oct. 31, 2011. In my treatment protocol, I followed every recommendation from my previous training: I massaged, stretched, NMT’d, kinesiotaped and fascially manipulated everything I could think of relating to her condition. However, the patient still exhibited the return of same clinical symptoms.

Physical Therapy Round #2: Beginning in 2012, her physical condition had worsened. She was not able to run or exercise without the use of Ibuprofen, which eventually became minimally effective. In late 2012, she developed severe muscle atrophy and constant pain. She modified all her physical activities and training exercises. Her hip began to feel unstable. Again, an MRI was performed with the same conclusion: NO reason for the rod being the cause of her knee pain.

Since her pain was constantly referred to the knee, her physician suspected meniscus damage. For this reason, a special MRI was performed which was negative. She was again referred to physical therapy.

Eyes Wide Open: In early February of 2013, I completed a Medical Massage course with Dr. Turchaninov. I contacted my patient again to re-visit her treatment plan for her condition. At this point she was considering having the rod removed, since she firmly believed that it was the cause of pain despite that fact all tests stated it was not the case.

February 19, 2013: During an initial Medical Massage examination, I concentrated on the origin of innervation of the affected areas. The Trigger Point Test for the right Quadratus Lumborum (QL) Muscle was strongly positive. Considering my findings, I performed the QL MEDICAL MASSAGE PROTOCOL as instructed in class. To my great surprise, the patient noticed immediate relief from the knee pain, which continued into the next morning.

February 22, 2013: Second visit: The patient reported notable decrease in pain intensity. Returning to pain free ADL. She had no knee pain after this visit, and felt moderate pain in the hip area only.

February 26, 2013: Third visit: She continued experiencing no pain in her knee, and pain was isolated in the hip. Negative for the QL Trigger Point Test.

At this point, I was certain that we had found and treated “The Cause” of all her problems. The tension in the QL had mildly irritated the upper lumbar spinal nerves, which contribute to the femoral nerve. As a result, she had developed mild case of Femoral Nerve Neuralgia, which was responsible for the radiating pain to the hip and knee creating atrophy of the quadriceps.

June 11, 2013: Success!!! Patient continues to be pain free. Has returned to full physical activities in the gym and has added running to her exercise routine.

Since this eye-opening case, I have re-visited a handful of my “tricky” patients with similar successful results. The MEDICAL MASSAGE PROTOCOLs discussed in the Medical Massage textbook and Video Library are highly effective clinical tools, which have greatly helped my patients. These treatments definitely changed my entire approach to massage therapy and my practice. 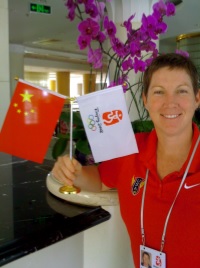 Angela Bitting has 22 years of massage experience and is a graduate of Eckerd College, with a degree in Wellness and Holistic Health.
She has been providing treatment oriented sport specific massage and stretching to professional athletes for 14 years. Ms. Bitting had the honor of being a member of the sports medicine team for USA Track & Field, including multiple trips to World Championships and the last two Olympic Games.
Angela operates a private practice in the Tampa, FL area where she resides with her husband Mike and daughter Amelia.