Despite that diagnostic tools and treatment techniques to restore connective tissue function are a cornerstone of somatic rehabilitation these modality have received limited exposure among somatic practitioners until recently. Thanks to Fascia Congresses, the role of connective tissue structures in somatic rehabilitation has regained professional interest, and several significant scientific discoveries have been reported, as for example, the role myoblasts play in combination with other factors in the formation of tension in the fascia.

Despite that Fascia Congresses played an important role in casting the spotlight on tension in connective tissue, the methods of its treatment did not changed. Initially, we would like to emphasize that only three methods offer sufficient clinical potential for quick and effective relief of tension in the connective tissue structures: Connective Tissue Massage (CTM) orBideegewebsmassage, Myofacial Release (MR) and Cupping Massage (CM). These techniques may be used in combination, such as MR combined with CTM. In such case, the more general impact of MR on fascia is combined with the intimate physiological action of CTM. In another scenario, CM can be conducted along the strokes of CTM.

There are other methods and techniques which are able to target the fascia, such as Rolfing for example. We emphasized the value of CTM, MR and CM because they target the connective tissue structures specifically. We would like make our readers aware that many other methods and techniques to address connective tissue currently promoted in continued-education classes are a repackaging of the same ideas often in far less clinically effective forms. In this article, we discuss the application of CM and its combination with CTM.

First a short historical review: Initially, the importance of tension build-up in the connective tissue and its impact on chronic somatic and visceral abnormalities was made known to the medical community through the work of Austrian physical therapist Elizabeth Dickle in 1929. As with many important discoveries, Dickle’s discovery was an accidental find. For several years, she suffered a failure of arterial circulation in her lower extremities as a result of Thromboangiitis Obliterans. The disease had progressed to the stage that amputation was a real possibility. Dickle also experienced chronic, lower-back pain caused by her limping. While rubbing her lower back in trying to relieve tension, she noticed sensations of warmth and weak pulsations in her feet. Intrigued by her finding, she started using various techniques on her lower back. She noticed that the most intense warm sensations in her feet were triggered when she pulled the skin on her lower back. After several months of self-therapy, she was able to restore circulation through her lower extremities.

E. Dickle shared her findings with Prof. W. Kohlrausch. Their combined efforts, as well as the later works of Prof. N. Veil and Dr. Luebe in Austrian and German clinics, shaped a major method of somatic rehabilitation they called Bidegewebsmassage or CTM, as it is known by the rest of the world.

The basic theoretical concept of CTM is Connective Tissue Zones (CTZ), which form in connective tissue concentrated in three levels: dermis of the skin, superficial fascia and deep fascia. The CTZs are formed in the soft tissue as a response to acute injury, chronic inflammation (e.g., Rheumatoid Arthritis), chronic overload or low-grade irritation of the peripheral nerves, which are responsible for the innervation of the affected area. The last cause is quite common yet is frequently misunderstood and missed by therapists or physicians. As a result of these factors, the collagen fibers, which are the main component of connective tissue, lose elasticity and flexibility. This hardens and shortens the entire fascia that, in turn, decreases the mobility of the skeletal muscles it covers. Such restrictions contribute to the later formation of hypertonic muscular abnormalities in the form of hypertonus, trigger points and later myogelosis. Tension in the CTZs contributes to another clinical phenomenon: the restriction of mobility between different layers of soft tissues. Fig. 1 illustrates the soft tissue arrangement in the posterior shoulder.

Fig. 1. Arrangement of the soft tissue 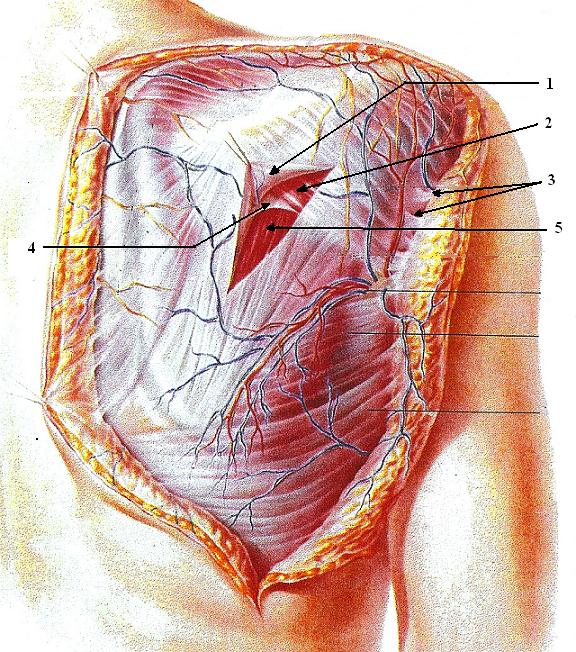 One of the goals of CTM, as well as MR and CM, is to restore the elasticity of the fibrotic bridges. Furthermore, the therapy will secondarily decrease the tension built up in the superficial fascia with a following decrease in muscle tension. Besides restoring somatic function and eliminating active CTZs, CTM, MR and CM also can help patients with chronic visceral disorders. As shown in many clinical studies, chronic visceral abnormalities trigger the formation of CTZs as a reflex reaction of the body to the long-lasting pathology of the inner organs. CTZs will form in the parts of the fascia that share the same innervation with the affected inner organ. Fig. 3 illustrates the location of CTZs for the major visceral systems of the human body. 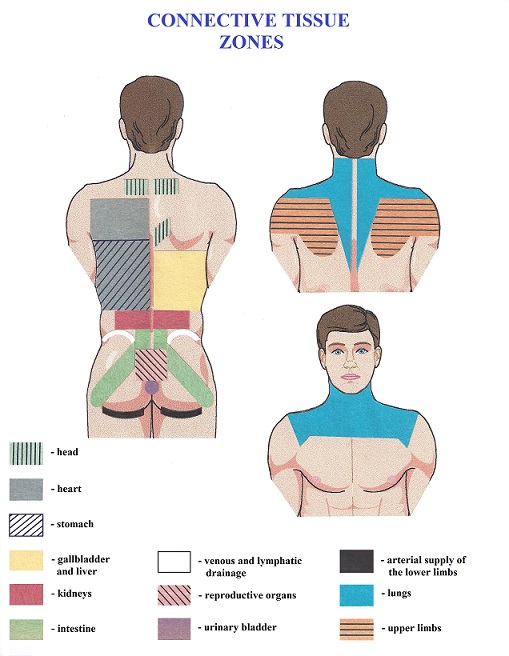 Fig. 3. Map of CTZs on the back in cases of visceral abnormalities (Ebner, 1985)

As we discussed above, there are three major clinical tools to affect CTZs: CTM, MR and CM. Here we will discuss Cupping Therapy (CM). CM is an ancient Chinese medical practice. Since 1950, it has been adopted as an accepted modality for use in all hospitals in China and many other countries (Cao et al., 2012). There are several variations of cupping: retained cupping, flash cupping, moving cupping, wet cupping, medicinal cupping, and needling cupping.

Different types of cupping alone or in combination with other modalities have been shown to help patients with pneumonia and chronic bronchitis (Wang 2010), facial paralysis (Qiu et al.,2003), herpes zoster (Ci, 2010), chronic cervical pain (Lauche et al., 2009), chronic lower-back pain (Farhadi et al., 2009), etc. Thus, cupping offers additional health benefits to patients beyond restoring the function of the fascia. We will discuss here moving cupping or CM as a part of the medical massage session. For successful somatic rehabilitation, CM alone is not sufficient and should be used only as a tool in combination with other techniques and modalities.

Originally, for moving cupping, as well as other types of cupping, fire was used to create the necessary vacuum in the cup before placing it on the body. The practitioner lit up a cotton ball on a metal stick, quickly placed it inside the glass cup and, within seconds, the fire had consumed all the oxygen inside the cup. When the cup was immediately placed on the body, it sucked the skin and subcutaneous tissue into the cup. Later, cups with a valve on top and a pumping device to pump out air from inside were developed, enabling practitioners to have more control over the intensity of the pressure during CM. However, this method requires extra time to remove oxygen from the cup, and if the vacuum is lost, the entire procedure must be re-applied. Additionally, the rims of cups made from glass or hard plastic are inflexible, which unnecessarily traumatizes the soft tissue in the areas where cupping is applied.

Newer plastic materials have resulted in better products, including those made for cupping. These new materials allow flexible and softer cups without compromising the efficacy of CM. Boris Prilutsky, one of the authors of this article, developed the CM protocol using flexible silicone jars.

The video below shows a cupping set made from transparent silicone. The rim of each jar is much softer than glass or hard plastic cups, but does not alter the basic procedure of the CM application.

First the practitioner chooses a jar which matches the massaged area (see video below). The practitioner spreads lubricant over the skin where CM will be used. The amount of lubricant should be significant to allow the jar to slide freely over the skin. The therapist presses in the middle of the jar to push the air out, tightly places the jar on the skin and releases the pressure. This procedure creates a vacuum inside the jar. How much pressure is applied to the top of the jar will determine the intensity of the vacuum and how much soft tissue will be sucked inside the jar. Since the jars discussed in this article are transparent, it is easy to observe how much soft tissue is sucked in, and to decide whether to increase or decrease the degree of vacuum.

The next step in the application of CM entails sliding the jar over the massaged area. To enhance the application, the practitioner may carefully lift the jar while sliding it along the skin to additionally stretch the fibrotic bridges. Be sure not to detach the jar from the skin surface and lose the vacuum.

There are two methods to apply CM. In the first, the practitioner slides the jar back and forth over the area where he or she detected tension in the superficial fascia (see video below). A larger jar can be used to cover a larger area and save time.

In the second scenario, the practitioner combines CM with CTM. In such case the CM is applied along the strokes recommended by CTM. Fig. 4 shows the sequence of CTM strokes on the lower and middle back. 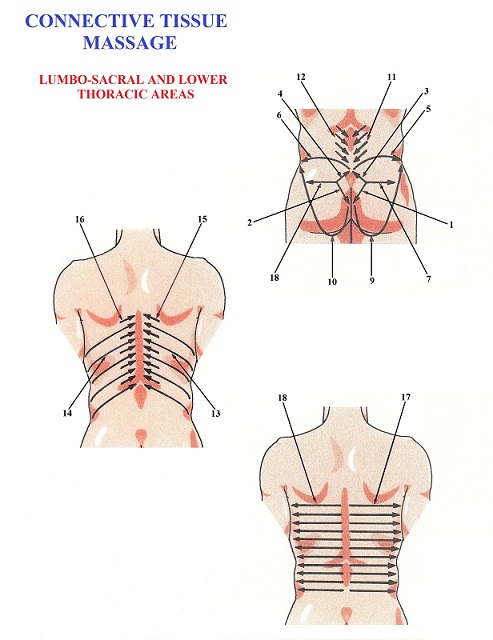 Fig. 4. Protocol of CTM in the lower back

In cases of CTM, smaller jars should be used since they are more stable and can easily move along the contours of the body. The video below demonstrates the advantages of using a smaller jar when CM is applied along the strokes of CTM in the lower back. When applying CM along the CTM, the strokes should be slow, and the practitioner should slightly lift the jar while pushing it forward and the returning strokes should be flat. The video illustrates this recommendation during an example of a lower-back treatment on the right side using strokes #13 and #15 from the Fig 4 as an example.

Since the CTM protocol is the result of decades of scientific research by Austrian and German scientists, it is the best and most efficient method to reduce tension in the fascia and restore its normal function.

CM has another clinical benefit since it can be used for the treatment of reflex zones formed in the skin itself, i.e., cutaneous reflex zones. In any area of the body where the patient feels tingling, numbness, burning pain, etc., the practitioner may use CM. In such cases, it is not necessary to lift the jar. Instead, increase the speed of the back-and-forth application to trigger local hyperemia (see video below).

We highly recommend CM as an alternative or in combination with CTM. However, we would like to emphasize that CM should be used only as an additional therapy tool to address, first of all, tension in the superficial fascia and, secondly, in reflex zones in the skin, i.e. the cutaneous reflex zones.

At this point, JMS does not place advertising in its articles. However, since silicon jars are an excellent clinical tool but are not easy to find even on the Internet, we decided to give those readers who are interested in this product a link to obtain them:

Personal message from Mr. B. Prilutsky:

I feel privileged to have developed the silicone-jar massage methodology as a part of MEDICAL MASSAGE PROTOCOLs to help practitioners with their clinical work. For the last two-and-a-half years, I have used silicone jars on a daily basis on my patients, and I feel very comfortable to suggest its application to our colleagues. It is excellent supportive technique and significantly accelerates the healing process. I highly suggest that readers consider this treatment option.

You can find silicone jars on the Internet, or you can visit website http://www.medicalmassage-edu.com where sets of jars and educational DVD are available.