THE SCIENTIFIC ROOTS OF SPORTS MASSAGE

To better illustrate this statement let’s go back in time to the person who first scientifically defined the Sports Massage concept. This is a story about an extraordinary man and brilliant scientist who devoted his life to serving people and who developed the science of Sports Massage! 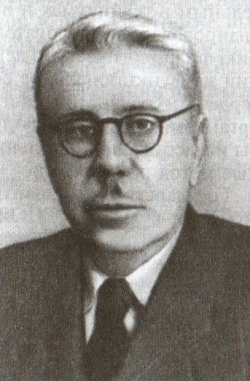 Professor I.M. Sarkisov-Sirasini (1887-1964) is considered the founder of the scientifically based school of Sports Massage. His contribution to medicine had great international recognition, including being named as one of the first honorary members of the International Federation of Sports Medicine.

Ivan Sarkisov-Sirasini was born in the Russian Empire at the end of the 19th Century and had many years of hardship growing up. Regardless of his own difficult childhood, Ivan was always drawn to the field of medicine, following his desire to help others. In 1905 he became an assistant to a local pharmacist in his hometown and in 1917 he entered the Medical School of Moscow University. After graduating medical school, he became interested in the clinical aspects of exercise and he started to give lectures on Remedial Gymnastics in the newly formed Moscow Institute of Physical Culture.

Dr. Sarkisov-Sirasini believed that every physician concerned about improving the health of the nation should find time to contribute to scientific research in the field of preventive medicine and especially in physical education. He wrote:

“The goal of medicine, in its pure form, comes down to preventing illnesses.”

In 1923 Dr. Sarkisov-Sirasini was offered a teaching position at the Moscow Institute of Physical Culture, where he spent the rest of his life developing the science of physical exercise and massage as a powerful tools of preventive medicine. In one of his initial lectures at the institute, he had stated:

“I want to prove that with the help of physical exercises and massage, the healthy person could stay healthy while the sick person could get better.” (Birukov, 2008)

Dr. Sarkisov-Sirasini learned about the power of massage in his earlier years, when as a young sailor he witnessed a Greek masseur helping the ship’s cook get rid of his back pain in just three sessions, while the ship’s doctor could not help. Later, while studying at medical school, he analyzed all existing literature on massage and its practical application in medicine and sports.

Dr. Sarkisov-Sirasini paid special attention to Sports Massage, after observing therapists perform it at a regional speed skating competition in 1922. In the conclusion to his observation, Sarkisov-Sirasini wrote:

Unfortunately, this observation is still relevant today. At every national sports competition when I observe Sports Massage therapists at work, the lack of scientific approach still amazes me and it is sad that we have the same problem almost 100 years after the initial observation made by I. M. Sarkisov-Sirasini.

The absence of any scientific foundation under the Sports Massage concept and the lack of qualified massage therapists in the Soviet Union and abroad convinced Dr. Sarkisov-Sirasini to start scientific exploration of this topic. First Dr. Sarkisov-Sirasini organized a Sports Massage club for the students and teachers at the institute in 1923. This club became a first stepping stone in the science of Sport Massage since its members conducted the first studies and published their results in professional journals.

In 1925, under Dr. Sarkisov-Sirasini’s initiative, the first in the country Clinic of Remedial Exercises and Massage was opened at the institute, where in-clinic treatments were provided to hundreds of athletes to enhance their performance and, as well, to patients with a variety of medical conditions. The clinic was also used as a training facility for students, as well as a base for scientific research.

1929, for the first time in medical history, Dr. Sarkisov-Sirasini organized a three-month course of Sports Massage for the physicians and coaches, and later it became mandatory in all physical education institutions and medical schools in the former Soviet Union.

In 1935 his first Sports Massage textbook was published. It instantly became a major textbook for students in all Institutes of Physical Culture across the nation, as well as physicians, athletes and sports coaches. Dr. Sarkisov-Sirasini became a professor in the Moscow Institute of Physical Culture.

Between 1945 and 1965, Prof. Sarkisov-Sirasini made an enormous contribution to the science of Pre- and Post-Event Sports Massage by personally leading the studies on this subject in application with different types of sport. As a result, specific Sports Massage techniques and protocols were developed and successfully implemented with the Russian elite athletes, contributing to their domination in the world sports arena!

To his last days, Prof. Sarkisov-Sirasini led the exemplary life of a true scientist, who had given his love, knowledge and experience to the people fully!

“Throughout the ages massage has played such a great role in human health that people should have dedicated a monument to the massage therapist’s hands long ago.”

So what is Prof. Sarkisov-Sirasini’s vision of Sport Massage as a modality and its place in bodywork? In his textbooks and scientific papers, Prof. Sarkisov-Sirasini and his colleagues clearly defined that Sports Massage is an exceptionally important tool for injury prevention and what is even more important, the correctly formulated Sports Massage protocol is an integrative component of the athlete’s entire training program. In such case the therapist and the coach always work together to build up the athlete’s endurance and power without compromising his health and ability to perform. In a sense, the training routine embedded into it with Sports Massage sessions (pre-event, post-event, rehabilitative, etc.) puts more and more healthy pressure into the coil and when the athlete is ready this needed power is unleashed during competition.

Thus the Sports Massage goal has nothing to do with various injuries due to training or sports competitions. This is the biggest misunderstanding about Sports Massage. The goal of Sports Massage is push the athlete or sports enthusiast to the peak of his or her performance and prevent possible injuries.

When injury occurs, the athlete or sports enthusiast is supposed to be treated with Medical Massage. It doesn’t matter where the rotator cuff was initially injured – whether during pitching a baseball or if one slipped on the floor and injured the same area by trying to stop falling. In the first scenario the athlete or in the second scenario the laymen must be treated with the same MEDICAL MASSAGE PROTOCOL for the Rotator Cuff injury and this protocol doesn’t have anything to do with Sports Massage.

Prof. Sarkisov-Sirasini was the first person who realized this important distinction. Also he and his colleagues developed Sports Massage protocols separately for each sport based on the most common involvement of muscle groups and the biomechanical imbalance.

This friction technique is a combination of deep-pressure effleurage with friction in the circular mode. SSF is to be used on large, flat areas of the body, e.g., along the vertebral column or on the thigh.

Be sure the active hand busies itself simply with the circular friction and that it is the supportive hand that assumes responsibility for the forward movement of the hands.
This video shows the clinical application of SSF on the posterior thigh, on the hamstring muscles.

To effortlessly execute SSF the practitioner must use the correct body mechanics. The propulsion of the active and passive hands comes from the practitioner’s body leaning forward. Such an approach unloads the hands and arms and makes the execution of SSF easier.

SSF targets the skeletal muscles as well as the fascia and aponeurosis and it is used in Rehabilitative Sports Massage. Because of the significant pressure applied, all muscle layers are affected. However, the technique does not induce pain since pressure is distributed equally.

Also SSF is very effective as a preparation of the muscle with hypertonic muscular pathology for Medical Massage treatment, especially Trigger Point Therapy. To apply this technique in cases of the trigger point, place the thenar eminence of the active hand on the area of the trigger point and compress the tissue. Do not move through the massaged area, but rather remain in the same spot. In this case, the moderate ischemic compression achieved, combined with friction of the surrounding tissue, have the advantage of diminishing the activity of the pain analyzing system in the area of the trigger point. This approach is especially helpful when the patient has a very painful trigger point or hypertonus.