Last week we had a patient with left shoulder pain and ROM restriction. Two months ago the patient started to feel pain in the shoulder, which eventually caused severe restriction of motion. He wasn’t able to raise his arm or even slightly put his left arm behind his back.

The patient was diagnosed with Frozen Shoulder due to the partial damage to his rotator cuff (supraspinatus tendon part) which was confirmed by an MRI. After a month of PT, the intensity of the pain subsided and there were significant improvements in the left shoulder’s ROM. However, recently the treatment reached a plateau and there wasn’t any further improvement. 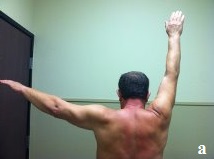 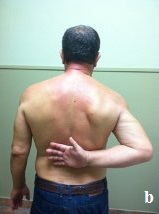 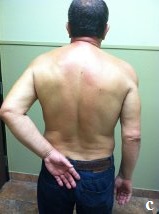 Fig.1. ROM in the patient’s left shoulder during his initial examination

a – active abduction in both shoulder joints

b – active inner rotation in the right unaffected joint

Detailed questioning of the patient revealed one important piece of information. He sometimes has almost full ROM in the shoulder with only residual pain. Considering this we examined the pathways of nerves which innervate the shoulder joint. The Compression Test for tension in the pectoralis minor muscle was negative and for the anterior scalene muscle was moderately positive. However, as soon as we applied moderate pressure on the paravertebral areas on the level C5-C6 and on the spinous processes of the same vertebrae, the patient felt acute pain there and new poorly described sensations which appeared in the left shoulder.

For approximately 30 minutes we worked on the posterior neck unloading cervical muscles and vertebral segments using MEDICAL MASSAGE PROTOCOL without even touching his left shoulder. 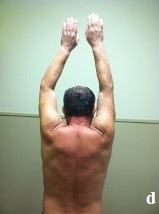 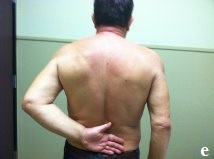 Fig. 2. ROM in the left shoulder after the first treatment session

1. We can’t stress enough the importance of a correctly conducted Clinical Interview. For practitioners this is a priceless tool to make the correct decision about MEDICAL MASSAGE PROTOCOL needed for a particular patient. One seemingly unimportant piece of information – “sometimes pain intensity decreases significantly while ROM improves” – completely changed the treatment priority. If the pain and ROM restriction in the left shoulder were originated within the shoulder itself (i.e., a partial tear in the supraspinatus muscle), the patient would never on its own have had sudden improvement while the pain intensity subsided.

In this case the origin of the axillary nerve on the level of C5-C6 was slightly irritated by the disk or paravertebral muscles and it created a clinical picture of Rotator Cuff Syndrome and later “Frozen Shoulder.” Since irritation of the spinal nerves from which the axillary nerve originates was mild, the patient never complained to anyone about any cervical symptoms.

2. We addressed understanding the importance of a correctly conducted clinical interview in the special article entitled “Science of Clinical Interview.” At the end of the article an evaluation form can be downloaded and printed to use for patient evaluation.

3. All therapists who worked on this patient made the same mistake – they blindly followed the symptoms instead of detecting the real cause. At The Science of Massage Institute we constantly reinforce this critically important rule of medicine – use pain and other symptoms as a lead but don’t blindly follow them. Pain is a ghost! Find its initial trigger!