Recently we had an interesting patient. A woman in her early 60s complained about pain in her right shoulder, especially during active abduction. She was treated by a DC, a PT and an MT for almost a year but her symptoms got worse. A neck and shoulder MRI indicated normal changes associated with aging.

Let me illustrate the value of a clinical interview in this situation. When she was asked about symptoms of tingling, burning pain or numbness in her right upper extremity, she said yes since she periodically feels pins and needles on the dorsal surface of her forearm. She never mentioned that to anyone since she thought that this issue was unrelated to her shoulder pain and apparently no one asked these simple questions. The presence of tingling or pins and needles completely changes the evaluation and potential therapy since it is a 100% sign of nerve irritation. She also revealed that a year ago she felt pain on the left side and it was very severe since her entire left arm was aching and burning at night. After the uncomfortable sensations subsided, she started to feel pain in the right shoulder.

Here is the value of clinical observation: Picture 1 shows the position of the patient’s head and shoulders. It is obvious that her head is slightly tilted to the left (blue lines) and the left shoulder is elevated (red lines). 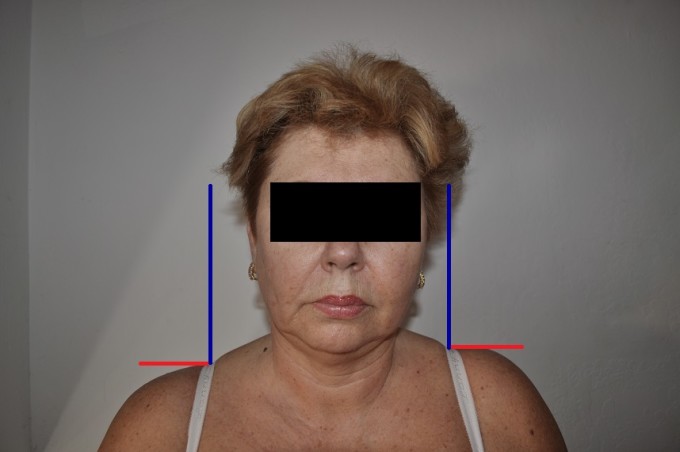 Red lines – difference in the position of shoulders 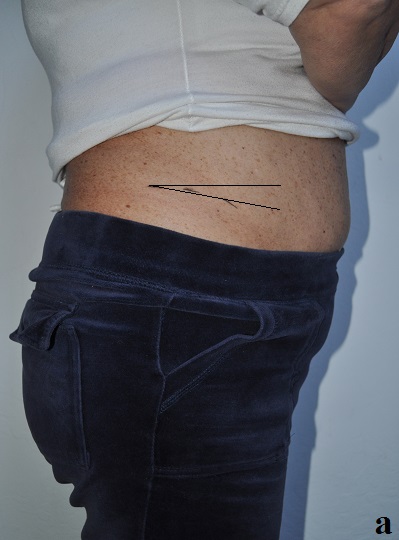 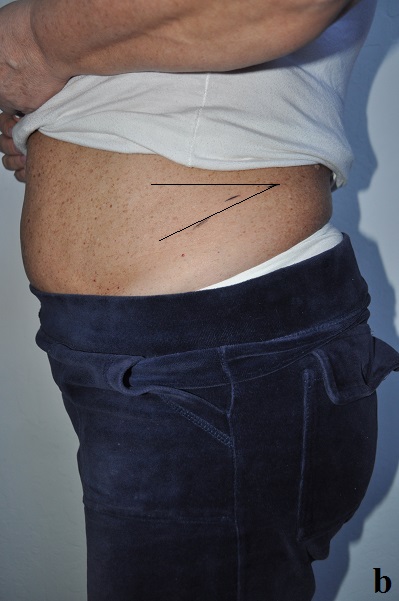 Now comes the value of palpation. Since the patient had sensory abnormalities in the right arm and she had them before on the left upper extremity, we started with Wartenberg’s Test to detect possible tension in the anterior scalene muscle. Pic. 3 illustrates the initial position of the examiner’s thumbs even before application of the Test. Notice that on the left side the thumb sinks deeper into the supraclavicular fossa compared to the right side. This is the result of a tensed right anterior scalene muscle filling up the supraclavicular fossa. The next step of the Test was application of pressure behind the clavicles. As soon as even slight pressure was applied there, it immediately sent referring pain to both upper extremities. 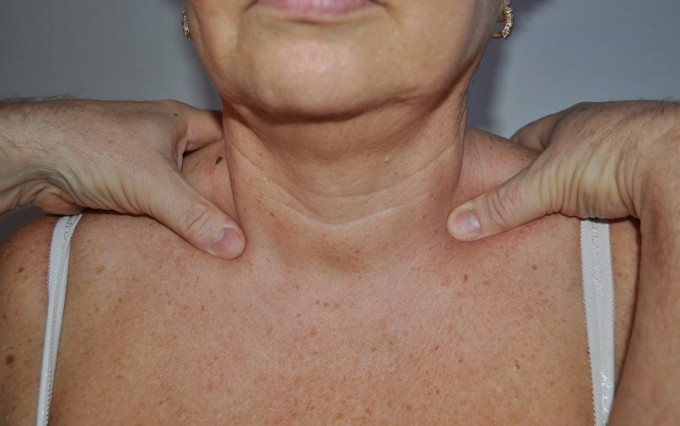 Pic. 3. Position of practitioner’s thumbs in the right and left supraclavicular fossa

Usually Anterior Scalene Muscle Syndrome is a unilateral pathology. However, in this patient it was obvious that the anterior scalene muscles irritated the brachial plexus on both sides. What was puzzling was the head tilt to the left and the elevation of the left shoulder while symptoms were only on the right. To clarify this issue we asked the patient to tilt her head to the right while Wartenburg’s Test was repeated on the left. 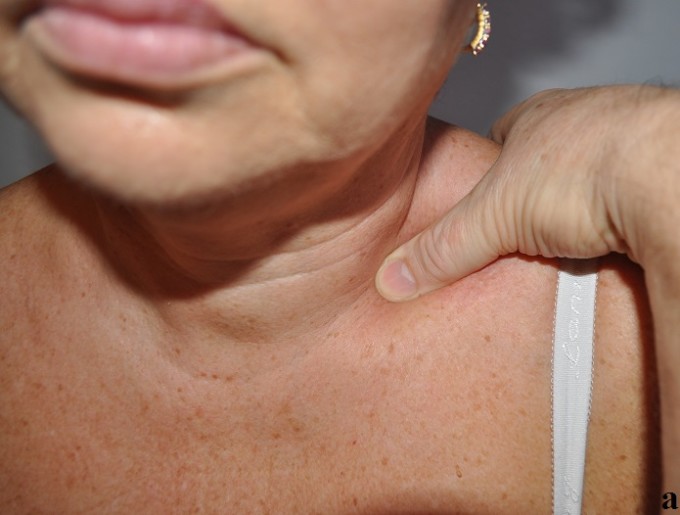 Pic. 4. Position of the thumb in the left supraclavicular fossa

a – the patient’s typical stand

b – head tilted to the right

From this simple evaluation we can recreate what happened to the patient. She originally had significant tension in the left anterior scalene muscle which irritated the left brachial plexus. Eventually it was partly reduced by various therapies but it wasn’t completely eliminated and it became dormant. To prevent re-occurrence of the same symptoms on the left her motor cortex made all necessary changes to protect the brachial plexus. As a result the patient developed postural changes when her head became tilted to the left with simultaneous elevation of left shoulder. In this position the anterior scalene muscle is more relaxed and it lets the brachial plexus go. Prolonged postural changes in the position of the head triggered postural changes in the lower back with a following anterior rotation of the left pelvis.

As a result of secondary postural changes which are a pure protective reaction, the force of gravity and the head’s weight spread unequally throughout the neck and shoulders, triggering an acute spasm in the right anterior scalene muscle. Now this tension started to irritate the right brachial plexus, triggering pain in the right shoulder which became a leading complaint and that was what brought the patient to our clinic.

Despite the presence of initial symptoms in the right shoulder, the only correct treatment option in this case is the application of MEDICAL MASSAGE PROTOCOL first on the left anterior neck and after 2-3 sessions on the right anterior neck. The right shoulder is to be addressed only after both brachial plexus are free from the irritation. This is exactly what we did during 5 sessions of step by step application of corresponding MEDICAL MASSAGE PROTOCOLs, first on the left side, later on the right in combination with decompression of the right shoulder. As a result, pathological changes on both sides were completely eliminated.

We let the patient continue to work at home with passive stretchings and exercise in the swimming pool and saw her two weeks later for evaluation. Pic. 5 illustrates the patient’s posture two weeks after the last session. Pic. 5(a) illustrates the normal position of the head and shoulders while Pic. 5(b) illustrates the normal position of the left iliac crest (compare size of the iliac crest angle with Pic. 2b). This is the critical point of this post since we didn’t even touch her lower back and left pelvis. 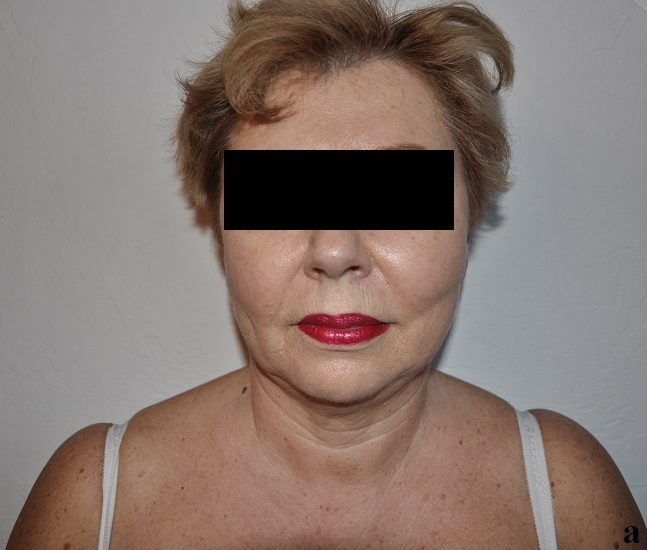 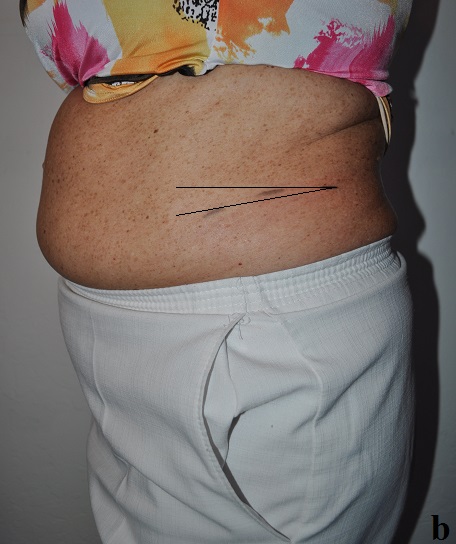 a – normal position of head and shoulders

1. Let’s for a second imagine this patient goes through any treatment modality which addresses the visual changes presented by the patient. In such case the lower back and ilio-sacral joints will be targeted to eliminate rotation of the left pelvis and trapezius and the levator scapulae will be targeted to eliminate head tilt and shoulder elevation. These strategies will bring to the patient some relief and take the edge off her pain and suffering. However, this therapy will just patch the problem instead of completely eliminating it. This is exactly what the patient did for almost one year. The real trigger was in a completely different part of the body (anterior neck) and required application of a completely different protocol for Anterior Scalene Muscle Syndrome.

2. Never start somatic rehabilitation with a modality based on kinesiology. Various Structural Integrations, Structural Energetic Therapy are useful tools which can be used but only after the initial trigger is identified and eliminated.

Let’s say that practitioner uses an incorrect modality and addresses rotation of the pelvis as the first step in the treatment strategy. This is a very common recommendation from several sources. In this case the practitioner fights with postural changes which are a protective reaction of the brain to the initial trigger which continues to stay hidden behind those changes.

When should techniques or modalities based on kinesiology be used? Let’s take as an example the same patient. If in two weeks, after the last session of Medical Massage, her evaluation shows negative Wartenburg’s Test but the postural changes are still present, the kinesiology-based methods and techniques must be used to finalize treatment.

3. Medical Massage isn’t one method or technique but rather a concept which integrates various somatic rehabilitation modalities, including those which are kinesiology based. However, the overall success of somatic rehabilitation relies on the correct vision by the therapist who is able to identify the initial trigger – which bring us back to title of the post: “Which is the chicken and which is the egg?”

4. Despite the seeming complexity of evaluation, this is what Medical Massage therapists are supposed to do and The Science Of Massage Institute provides such training and skills.