When a Medical Massage clinic starts to deliver stable clinical results from patient to patient, it attracts more and more difficult cases. Patients start to see the clinic as a place to get the ultimate solution for their pain and suffering while everyone else failed. We see this on daily basis in our clinic in Phoenix, as well as in clinics associated with SOMI but located in different cities, including San Antonio, Colorado Springs and Los Angeles.

Here is an example to illustrate this phenomenon: Four months ago we had a very unusual case in our clinic. The patient was referred to us by her friend. Two days prior her first appointment she woke up and she couldn’t lift her right arm. The patient is a hairdresser and she was forced to stop working while looking for help. The video below shows the initial clinical picture.

As you can see on the video the patient lost active abduction, flexion and weaken extension. However, she didn’t have any pain, numbness, tingling or burning sensations. In other words, there were not any abnormalities in the sensory innervation of the right shoulder and neck besides a sudden loss of function. While looking carefully at the video you may have noticed that the patient could lift her right upper extremity up 20-30 degrees with complete loss of further abduction and flexion. Thus her supraspinatus muscle which is supposed to initiate movement was functioning but the patient completely lost function of the right deltoid muscle which supports further movements.

Technically speaking, the clinical picture the patient exhibited was of Erb’s Palsy but the complete absence of sensory deficit was really puzzling. The most common cause of Erb’s Palsy is damage to the brachial plexus of a newborn during delivery if the child passes through the birth canal arm first. In such case the obstetrician is forced to assist birth using the child’s arm as leverage. It causes Erb’s Palsy after the delivery and in different degrees it may remain for the rest of the child’s life.

Another cause of Erb’ Palsy is compression of the spinal nerve by the disk on the level of C5-C6 or compression of the brachial plexus between the anterior scalene and scalene medius muscles. Overall, Axillary Nerve Neuralgia is only 6% of all brachial plexus irritations by ASM (Loukas et. Al., 2009). However, in all these cases the patient MUST exhibit sensory abnormalities (pain, numbness, tingling etc.) in the neck and/or shoulder. This wasn’t the case for this patient. She only lost function.

We suggested to the patient that she see a neurologist first and he was equally puzzled. A nerve conductance study was done and the cervical MRI didn’t reveal any severe spinal stenosis as a result of disk protrusion. The neurologist decided to use facet joint injection in the neck and sent the patient to the PT where her neck and right shoulder were worked on. All of that was unsuccessful and the patient was greatly frustrated when the neurologist told her that there was great chance she would have these symptoms for the rest of her life.

The patient came back to our clinic with the same symptoms and very depressed. Since she didn’t exhibit any other symptoms besides the lost function we addressed posterior (paravertebrals), anterior neck (anterior scalene muscle) and deltoid muscle itself. After five sessions we got very modest improvement which you can see in the video below. The active abduction and flexion increased slightly.

Something was definitely wrong with the therapy since we realized that we were knocking on the same door people before us were trying to open. We needed a change in the treatment strategy. Since motor function of the deltoid muscle is supported by the axillary nerve we decided to work along the entire pathway of the axillary nerve including axilla and posterior humerus. The patient came back after the session with a new treatment strategy in two days. The video below illustrates what we got just in one (!) session.

Notice that she had excellent progress, but she could do full active movement only one time, then the muscle refused to cooperate with her even with a second attempt to repeat the same movement. It meant that our treatment released the initial trigger of nerve irritation, but the muscle was very weak and didn’t have enough power to support repetitions.

We sent the patient to the swimming pool to do light repetitive exercise with the shoulder submerged under the water to increase muscle mass without jeopardizing the inflamed nerve. The patient and we were greatly excited with the results of first session. In three more sessions she had complete restoration of function and muscle mass and fully came back to her work. The video below illustrates the final results.

1. Medical Massage has enormous clinical potential but therapists must understand several basic rules: find the initial trigger of somatic pathology by knocking on all possible doors; the trigger is frequently hidden in what seems like completely unrelated places; the therapist shouldn’t give up and always change the treatment strategy if therapy doesn’t show a positive dynamic.

While everyone including us initially concentrated on the most obvious places of axillary nerve irritation as posterior and anterior neck, the real trigger was in the deltoid muscle itself. PT and us worked on the deltoid muscle but all of use focused on the origin of its innervation in the neck.

2. We constantly stress to students that everything in Medical Massage is precision. If a therapist is 1/3 of an inch in an incorrect position, he or she addresses unrelated tissue. This patient is an excellent example. Let’s reconstruct what happened to this patient with the help of Fig. 1, which shows the pathway of the axillary nerve on the posterior shoulder. 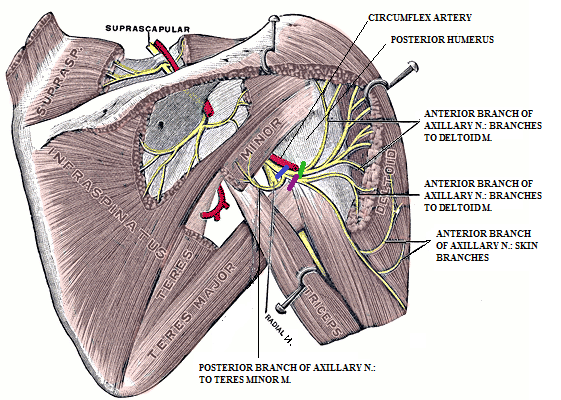 Immediately after getting on the posterior shoulder just below the humeral head and under the deltoid muscle, axillary nerve splits into anterior and posterior branches. The posterior branch goes backward and innervates the teres minor muscle and it is unrelated to our case. The anterior branch goes forward and gives further deeper motor branches to the deltoid muscle which penetrates the muscle and controls its function and more superficial branches which innervate the skin over the shoulder.

If the deltoid muscle gets tense it may irritate the axillary nerve which is just under it. For our patient it happened because of her hairdresser’s work while she holds both arms in the air by isometrically contracting deltoid muscle.

In the Fig.1, the violet color bar indicates the cutaneous branch and the green bar indicates the motor branch. If the tensed deltoid compresses both branches the patient will again exhibit loss of function AND sensory symptoms. If the deltoid muscle selectively compresses the motor nerves of the anterior branch (blue bar), which need to penetrate muscle to support its contractions, the patient will have only symptoms of lost function WITHOUT pain or any other sensory symptoms.

3. The treatment which made the immediate difference for this patient targeted the inner surface of the deltoid muscle just below the head of the humerus and it was done using posterior access through the axilla. It has to be done correctly without any excessive pressure because the axillary nerve is on the bone and the nearby circumflex artery.

4. If this patient hadn’t had access to Medical Massage she would have faced the prospect of a long recovery with likely development of scarification in the joint capsule (adhesive capsulitis) or as the neurologist suggested, she would have had the same or residual symptoms for the rest of her life.