Two months ago we had an unusual patient in our Phoenix clinic – a male 45 years old who works two jobs as an air conditioner technician presented with moderate intensity lower back pain and significant body twist. He exhibited severe compensatory scoliosis to the left with elevation of the right side pelvis, and a twist in the thoracic cage.

This deformation didn’t change even a bit while he was comfortably positioned on his back. It stays with him 24 hours a day. The patient didn’t feel any sensory abnormalities (tingling, numbness and burning pain) in the gluteal area or down the leg. His pain level was very intense during the mornings but later during the day it became more tolerable and he continued to lift heavy equipment and climb on roofs. Fig. 1 illustrates the initial clinical picture. 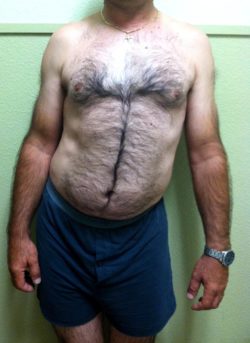 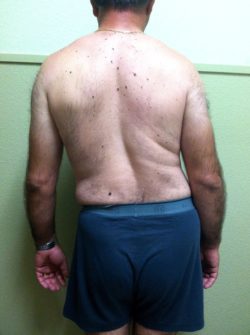 The patient said he developed this body twist after installing an air conditioning unit on the roof of a condo. During palpatory evaluation the patient exhibited a decrease of the sensation on the anterior thigh during the application of a Sensory Test (a condition of Hypoesthesia). Also as soon as even mild pressure was applied on the right Quadratus Lumborum (QL) muscle he reported severe pain in the lower back which radiated to the inguinal area and upper front thigh.

Considering the intensity of body twist, the fact that even in the horizontal position the intensity of deformation didn’t change and the presence of Hypoesthesia on the thigh, it was obvious that the patient had severe spasm in the QL muscle which slightly irritated L1-L2 spinal nerves and it triggered mild Femoral Nerve Neuralgia.

The only unusual thing was the absence of acute lower back pain during the day to the point that the patient was able to continue his hard job as an air conditioner technician. Typically, patients with such intense deformation are in a lot of pain all day long and even deep inhalation triggers acute pain while sneezing and coughing feel like a disaster.

Rehabilitation of patients with QL Syndrome is a complicated process which demands the combined efforts of the therapist and the patient. We explained to the patient the necessity of taking a break from work until some progress is made and suggested to him supportive homework and started the treatment process. The patient promised to do only light work and manage others who would do the physical work for him.

Three weeks passed with 3 sessions per week and there wasn’t any significant improvement in the clinical picture. Usually by that time the deformation is eliminated and function is restored or at least some positive clinical dynamic should be seen. However, that wasn’t the case.

At that time it was obvious that something else was going on. We repeated the evaluation but didn’t collect any new data. We started to press the patient about what he was doing and if he did supportive therapy at home. Seeing our frustration, he finally confessed that all this time he didn’t slow down even a bit and continued to work two jobs putting air conditioning units on the roof. He now also understood that his therapy wasn’t going anywhere and it was obvious to him that he needed to make the necessary adjustments at work.

After he stopped heavy lifting even one medical massage session made great improvements. Here is the result after only one session of Medical Massage therapy when the patient took a complete break from work (see Fig. 2). 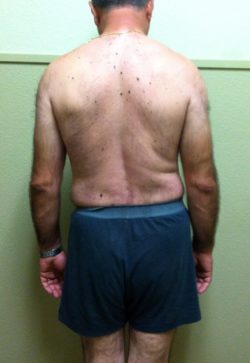 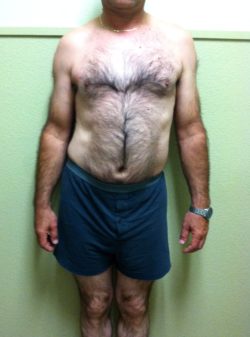 Fig. 2. Clinical picture after one session while the patient took a break from work

Fig. 3 illustrates the same patient after three sessions. Some residual lateral flexion to the right is still present but it was completely gone in another 3-4 days of supportive therapy at home 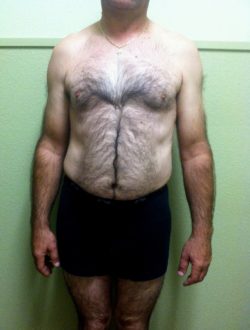 Fig. 3. Clinical picture after three sessions while the patient took a break from work

2. As a result of initial strain in the QL muscle the brain blocked it early enough that QL didn’t severely compress the spinal nerves, which are in direct contact with it and this was the explanation for the absence of severe pain while such expressive protective postural reaction was present.

3. For patients with spasm in the QL muscle or in the Lumbar Erectors the adjustments to their lifestyle and work they do while they are going through therapy are a critical component of quick recovery. Otherwise the therapist needs much more time and effort and the overall stability of the clinical results will be questionable.