Recently a 35 year-old male presented to our clinic with symptoms of bilateral neck, right sided mid back pain. His entire hand was numb and tingling. He said that this pain started approximately 6 years after a motorcycle accident. He was ejected from a motorcycle at a high speed when a car ran in front of him. He was thrown through the driver side window and landed on the driver’s lap. His right side head, neck and shoulder sustained most of the impact. He was knocked unconscious, was in critical condition and was airlifted to the hospital.

After the trauma he received 3 months of physical therapy for his neck and right shoulder, which provided minimal relief. He led a very active life prior to the accident, was involved in baseball, golf and went to the gym daily. He said the constant pain was greatly affecting his daily activities and greatly affecting his quality of his life.

Besides physical therapy he used chiropractic care but relief was temporary and the symptoms would return. He had been supplementing his diet with white willow bark and was using a topical analgesic Cryoderm Heat at night and Cryoderm Cold during the day.

The patient rated his right neck and right mid back pain at a 5-6/10 and his right upper extremity and hand pain at a 6-7/10 on the Mankoski Scale. He described the pain in the neck as constant and aching. He felt constant radiating and shooting pain to the right upper extremity with tingling and numbness into entire right hand. He noticed that the intensity of symptoms worsen when the weather becomes cold. He also mentioned that his symptoms were aggravated with the shoulder’s adduction as when he does chest exercises and when he sleeps on his right shoulder.

My initial impression was that he had Anterior Scalene Syndrome and possibly right side Rotator Cuff Syndrome. My next step was soft tissue evaluation.

1. Wartenberg’s Test was positive indicating tension in his right side Anterior Scalene Muscle (ASM) and entrapment of the brachial plexus there. I suggest to all therapists to use this simple test on each patient with any abnormality in the upper extremity. Wartenburg’s Test allows you to rule out irritation of the nerves of the brachial muscle by ASM, which is a very frequent cause of abnormalities in the function of the upper extremity. 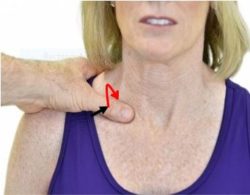 2. Adson’s Test was also positive on the right and it confirmed the presence of circulatory abnormalities on the upper extremity due to severe spasm in the right ASM. Thus, the positive Adson Test indicated that the clinical picture had already passed the stage of Anterior Scalene Muscle Syndrome and now the patient suffers from Thoracic Outlet Syndrome.

4. Sensory Test – Confirmed the presence of Hypoesthesia (i.e., decrease of sensation during the skin stimulation on the affected side compared to the unaffected side). The Sensory Test was positive on the hand within the distribution of the ulnar, median and radial nerves on the right and it meant that all nerves which supply the hand were irritated.

Thus the examination pointed to the presence of tension in the right Anterior Scalene Syndrome, which affected Radial, Median and Ulnar Nerves. The patient also exhibited reflex tension in the Right Pectoralis Minor, Brachialis and Extensor Carpi Radialis muscles.

Phase one included the MEDICAL MASSAGE PROTOCOL for Anterior Scalene Muscle Syndrome as it was suggested in the Medical Massage Volume I textbook and also by SOMI’s Video Library. The therapy was performed daily for 4 days.

Phase two started on the 5th treatment day. The patient stated that after four treatments he had a 50% decrease in the intensity of his neck and mid back symptoms. He also noticed that the numbness in his hand increased when he performed chest exercises.

Phase three started on the 8th treatment day. The patient noticed that his symptoms in the right upper extremity had decreased by an additional 25% as a result of the two previous treatments.

I then recommended he schedule two visits per month. The patient was instructed to perform the stretching part of PIR protocol for Anterior Scalene Muscle Syndrome as well as Pectoralis Minor Syndrome twice daily.

The results of the treatments were as follows:

In 10 treatments, the patient showed great improvement in intensity of symptoms and reported overall pain decreased by 85%. He also stated that the numbness in his right hand had completely dissipated.

1. This is a textbook case of upper extremity and even middle back symptoms triggered by the compression of the Brachial Plexus by the Anterior Scalene Muscle.

2. This case reinforces why the Medical Massage practitioner must thoroughly perform the evaluation of the soft tissues to develop an optimal treatment plan.

3. Treatment must be adjusted to each patient separately since each clinical case is unique. Using the same treatment strategy for all patients is a great professional mistake.