MEDICAL MASSAGE VS SHOULDER PAIN OR NOT?

Over the years, JMS has received a number of clinical cases as Case of the Month submissions where therapists have shared with our readers their stories of patients who suffered from tension in the Anterior Scalene Muscle (ASM). We usually name these submissions “Medical Massage vs Silent Killer,” since this nickname of Anterior Scalene Muscle Syndrome fully reflects the importance and widespread presence of this pathological condition. It remains hidden from health practitioners sometimes, including physicians, while it presents itself as a variety of the pathological conditions registered on the upper extremity.

Upon first glance, the current submission by Susi Crawford, CMMP, LMT is just another case of Anterior Scalene Muscle Syndrome. However, it presents the same subject from a completely different perspective. This is why we found it important to share with readers.

Susi is a graduate of our Medical Massage Certification program and very aware of the fact that before she evaluates and treats ANY abnormality on the upper extremity, she must rule in or rule out the tension in the ASM. She did exactly that at the very beginning. The reality became even more complicated, but she was able to solve this complex case and help her patient.

MEDICAL MASSAGE VS SHOULDER PAIN OR NOT?

A 60-year old woman came to my clinic with difficulty raising her right arm due to acute pain and occasional tingling sensation in both arms, more prominent on the right. Her sleep was compromised due to the night pain in the right shoulder.

For three months, she was treated by a chiropractor and massage therapists. It was maybe coincidence, but she came to my clinic right after I had attended the Rotator Cuff Medical Massage Seminar by SOMI.

Since she experienced periodic tingling sensations in both arms I suspected that tension in the anterior scalene muscle (ASM) could be the initial trigger. However, to my complete surprise Wartenburg’s Test to examine tension in the ASM was negative.

Since potential tension in the ASM was cleared by negative testing, I continued the examination concentrating on the right shoulder. Even careful palpatory evaluation of the right shoulder triggered very acute pain, especially in the supraspinatus, subscapularis muscle and teres major. She also exhibited active trigger points in the anterior and middle portion of the deltoid muscle.

The Drop Arm Test was positive, which indicated acute inflammation of the upper part of the rotator cuff. Also, she exhibited moderate restriction of the passive abduction in the right shoulder. It was an indicator of early stages of Frozen Shoulder (e.g., abduction contracture).

I decided to use MEDICAL MASSAGE PROTOCOL for the Rotator Cuff Syndrome on her right shoulder. The next morning after her first session I called her and she excitingly told me that she slept all night without waking up from pain for the first time in three months!

Apparently, she felt so good that next day despite my warnings to limit activity, she trimmed bushes in her backyard. Unfortunately, it reactivated all symptoms. Upon her next appointment, I reminded her that she must follow my recommendations thoroughly to get the results we were looking for.

It took us about 4 treatments to correct the consequences of her yardwork. With each treatment she had increased range of motion and a decrease in the pain intensity. Between sessions I asked her to regularly use moist heat and passive stretching.

However, at some point I felt that we reached a plateau and there were no further clinical improvements. I felt that I was missing something. I retested her again, starting from the beginning and to my complete surprise she now exhibited very positive Wartenburg’s Test on her right anterior neck which indicated tension in the ASM. From my perspective this tension could be a contributing factor to her pain and especially occasional tingling sensations on the right upper extremity.

I switched my therapy to MEDICAL MASSAGE PROTOCOL for the Anterior Scalene Muscle Syndrome. I used two more weekly sessions and gave her a break. In three days after her last treatment she was sleeping normal, has been pain free and has full range of motion in her shoulder and neck.

Thus, it took us a total of 6 sessions treating her right shoulder and anterior neck to completely restore function. My patient is now on maintenance about every 6 weeks. We did two such sessions. She continues to have full range of motion, sleeps normally and doesn’t have any tingling or burning.

She won’t go to anyone else and only occasionally visits her chiropractor. She started strength training and it additionally helps maintain her neck and shoulders.

I always try to analyze successes and failures in my practice. I was puzzled by my patient’s Wartenburg’s Test. Why initially it was negative and I found it positive later. As I now understand, the initial trigger of her symptoms was the presence of mild tension in the ASM which slightly irritated the brachial plexus, causing her shoulder pain and lost function as well as a tingling sensation on her arm.

I am sure that at the beginning she didn’t exhibit symptoms of ASM involvement because she had acute pain in her shoulder and in combination with months of unsuccessful therapy it hid the initial trigger. As a result her brain didn’t register Wartenbugr’s Test since it was overstimulated by the pain she felt in her shoulder and ROM restriction she had. As soon as I decreased intensity of her symptoms in the right shoulder, the initial trigger which is tension in the ASM became prominent and Wartenburg’s test became positive. 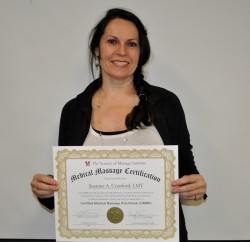 I grew up in the lovely state of Michigan but moved to the warm climate of Florida in 1981.  With three beautiful daughters demanding my time I needed a career that allowed me to be a stay-at-home Mom earning a full-time wage working part time.  My direction has always been health oriented and in helping people so that career choice easily took me into the massage field and in 1992, I became licensed in the state of Florida.  In addition, in 1999 I earned my license in Tennessee.

I heard about Medical Massage and Dr. Ross Turchaninov through the years and at one point I decided to take one of his classes.  All I can tell you is that “I WAS HOOKED!”  To find this depth of science referenced, proven, predictable – Medical Massage treatment was exactly what I was looking for.  I recognized immediately that this level of information raises the bar for the entire massage industry as well as the people who are in such need of help.  The timing was also perfect for me to continue taking classes for my own educational interests and to earn my Medical Massage Certification from SOMI.  I have dedicated the last few years to this goal and in November 2015 I was very proud to receive my CMMP Master Certification from The Science of Massage Institute.