About five weeks ago a 63 year-old female came to my office complaining about her left neck, shoulder, arm and hand pain.  What’s unique about this patient is that she is a breast cancer survivor.  In 2004, she was diagnosed with an advanced stage of breast cancer. Her treatment started with a full mastectomy.  Following the operation, she was treated with chemotherapy and radiation. Her last treatment was a series of operations for breast reconstruction.

During clinical interview, I learned that her neck and shoulder pain began immediately after her mastectomy.  Over time her pain has worsened. The pain now radiates from the neck and shoulder to the palm of her hand and base of her thumb.

However, considering the Trigger Point Test was still positive on the anterior neck I was fairly certain that the root of her problem was the anterior scalene muscle despite that the Wartenberg’s Test was negative. My Medical Massage training taught me that prioritizing treatment is first step to clinical success in difficult cases. From my perspective, the pain radiating to my patient’s arm and hand should be the first thing I should target and alleviate. However, before I started treatment, I decided to ask SOMI for some clinical advice.

I described the situation with my patient and Dr. Ross responded promptly, telling me that the negative Wartenberg’s Test and excessive tension in the pectoralis minor issue were more likely due to the initial surgery, radiation treatments and reconstructive surgery that my patient had received. All these interventions triggered formation of scar tissue which affected the normal function of the soft tissues, especially superficial fascia and greatly reduced their normal elasticity. He also agreed with my treatment plan. Armed with this information, I began work on my patient.

I followed the Anterior Scalene Muscle and Pectoralis Minor Muscle Syndrome MEDICAL MASSAGE PROTOCOLs.  The patient immediately noticed a dramatic reduction in the pain in her palm and at the base of her thumb. Since her husband accompanied her to the appointment I taught him to do light PIR to the anterior scalene and pectoralis minor muscles at home.

The patient returned a week later for additional treatment. She reported that within the previous week all the pain in her palm and thumb had disappeared. Furthermore, the pain in her elbow had been reduced by 50%. Her main complaint now was neck, shoulder and upper middle back pain. I began this session using the kneading according the protocol number 1. As I began to knead the free edge of the trapezius the largest myogelosis that I have ever found became prominent as the protective tension started to melt away. I explained to her what a myogelosis was and the impact it has on her neck and shoulder. I finished the protocol and then performed PIR to the trapezius muscle to reduce the impact of the myogelosis. As before, her husband accompanied her to the appointment and as before I trained him on how to do PIR to reduce the tension of hypertoruses around the myogelosis.

Two weeks later the patient called for another appointment. Her remaining issue this time was neck and posterior shoulder pain. Because of the myogelosis I knew that my options were somewhat limited but I decided to examine if there was a chance that her symptoms at least partly triggered by the reflex zones developed in the soft tissue secondarily.

During the simple testing I did on the upper back I found extensive distribution of cutaneous reflex zones within the T1-T12 dermatomes. Each of the circles in the picture below is the place where my patient reported sensations of burning, pins and needles (i.e., tingling) or changes in sensitivity when I applied the Sensory Test. 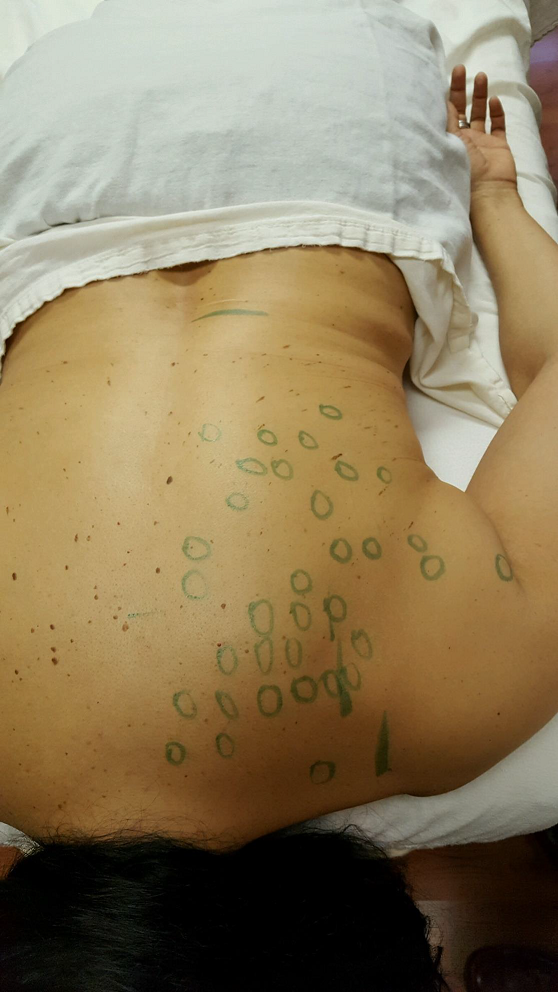 Fig. 1. Distribution of cutaneous reflex zones in the middle back of my patient

So, in three visits with the patient and her husband doing some “homework,” all of the pain that she had experienced since 2004…was GONE. After she got dressed, she and her husband said that they were planning a three-week trip to Denver and were concerned that her pain might return. I told them that they didn’t need to worry because Daniel Lopes, a very talented SOMI’s CMMP, practiced in Colorado. I gave them Daniel’s contact information.

So, what are the takeaways here? First take away: Medical Massage works because it is an exceptional clinical concept which I use on all my patients with quick and stable clinical results.

Second take away: SOMI provides great support when we need it in complex cases. It helps me tremendously in my practice

Third take away: If your patients are travelling or you are encountering stubborn clinical cases, don’t be afraid to refer them to a CMMP in that area if possible, sometimes just for the evaluation to help you to update the treatment plan.

Since some information in this article can be confusing for new readers, we think it worthwhile to give some further explanation of what Curt found and treated to fully appreciate results of his therapy.

The patient’s initial surgery was 12 years ago. She underwent a total mastectomy, extensive chemotherapy and radiation and finally breast reconstruction. As a result of all these life-saving treatments, which worked, she secondarily developed scarification of the superficial fascia on the anterior chest and later in the pectoralis major, deep fascia and pectoralis minor. Myogelosis is firm, marble-like nodule in the skeletal muscles which are irreversible degenerative change in the muscle belly.

Since superficial fascia covers our body like a glove, the tension in the chest fascia also spread to the anterior neck and upper middle back along the T1-T12 dermatomes. In the first case it triggered mild tension in the anterior scalene muscle, which irritated the brachial plexus with a following formation of pain and other sensory abnormalities down to the left upper extremity. These clinical symptoms Curt eliminated with Anterior Scalene and Pectoralis Minor Muscle MEDICAL MASSAGE PROTOCOLs.

In the second case the reflex zones in the skin (i.e., cutaneous reflex zones) formed on the upper and middle back and they created constant bombardment of the brain with noxious stimuli to which the brain responded with a motor reaction in the form of increased resting muscle tone. How did that happen? Fig. 2 shows the back with clearly visible cutaneous branches of the spinal nerves which innervate the skin. 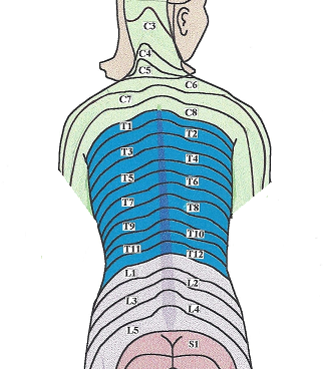 Map of Dermatomes              Cutaneous branches of the spinal nerves

Fig. 2. Map of dermatomes and cutaneous branches of the spinal nerves which innervate them

Each nerve you see in Fig. 2 innervates single dermatome which from the back goes all way to the breast bone. To get to the skin these fine nerves need to pierce skeletal muscles, deep and superficial fascia. If soft tissues in these levels, especially in the superficial fascia, carry even mild tension (in patient’s scenario as a result of mastectomy and reconstruction surgery) they will irritate cutaneous branches by slightly compressing them. When these nerves are irritated they create a flow of noxious stimuli to the brain and the brain forms sensations of pain, tingling, burning etc.

After Curt used Medical Massage techniques which targeted skin and superficial fascia, he freed the cutaneous branches of the spinal nerves from the direct pressure and by doing so he eliminated the cutaneous reflex zone as well as the protective reaction the brain formed to the initial response to their presence. Excellent thinking and treatment plan!