THE MAIN ENEMY IS NEUROGENIC COUGH

This case is from our Arizona clinic and it illustrates how completely different anatomical structures in our body interconnect and interact with each other.

Two weeks ago a medical assistant from our main office drove with her family to Los Angeles to Disney Land. On her drive back to Arizona she started to feel uncomfortable sensations in the middle back and the next morning she woke up with severe middle back pain which started to radiate forward to the area of the breast bone, especially on the left side. The radiating pain in her chest became very intense until she had great difficulty at work, even with simple tasks. She was prescribed pain medications and muscle relaxants. Prolotherapy was performed but the pain didn’t ease up. Additionally, she developed a persistent cough and each coughing effort dramatically increased the intensity of pain. Finally, after 10 days she was sent to our clinic for a second opinion.

Even the first glimpse of the patient indicated that she was in a lot of pain. She walked slowly, with shallow breathing, both shoulders rotated forward and neck flexed. She was slightly bent forward in her middle back as well. Interestingly, she was constantly coughing. These coughs were small, very repetitive and dry. Visual observation obviously pointed to possible Intercostal Nerve Neuralgia due to the spasm of middle back muscles and more likely subluxation of the rib(s) on the left.

The palpation confirmed that even moderate pressure applied to her trapezius and rhomboids triggered acute radiating pain. Palpation identified that 7 and 8 ribs on the left were the main problem area.

We asked her about her cough because its presence greatly undermined a treatment strategy since forceful contractions of respiratory muscles reinforce the spasm in the middle back, putting pressure on the rib and additionally irritate already compromised intercostal nerves.

According to the patient, she didn’t have a cold or allergy and her cough appeared 4 days after the start of her chest pain. Video 1 below illustrates the initial clinical picture the patient presented (rotated shoulders, hunched back). Also, pay attention to the nature of the constant cough. The patient doesn’t inhale before each cough. 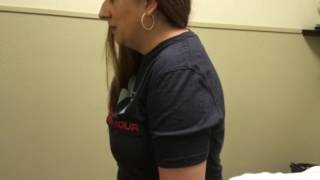 Since both rhomboids and trapezius were in spasm the first treatment option was unloading pressure on the brachial plexus, which is responsible for the innervation of these muscles. To do that we placed her on her back with the intention of starting with MEDICAL MASSAGE PROTOCOL for Anterior Scalene Muscle Syndrome. However, just the light touch of the anterior neck on the left with the intention to spread oil triggered an absolutely violent coughing attack, which brought the patient to tears since each cough triggered screaming pain in the chest. This completely changed the treatment strategy. The treatment of anterior scalene with the patient positioned on her back was out of the question.

We asked her to sit as comfortably as possible for her position (hunched back, forward rotated shoulders) while we proceeded to work very carefully on the anterior scalene muscle. Any increase of applied pressure on the anterior neck immediately triggered a cough. After we finished part of the ASM protocol we switched to the middle back and took pressure from the superficial fascia, trapezius, deep fascia and rhomboids using MEDICAL MASSAGE PROTOCOLs for Trapezius and Rhomboids. We finished the session addressing intercostal muscles in intercostal spaces and intercostal nerves all way to the sternum.

The immediate result of the first session was disappearance of the cough and larger mobility in the middle back despite that pain was still present but with less intensity. After instructing her to do homework we let her go for two days and we saw each other on the third day. The patient was moving more freely, smiling and she didn’t cough at all. We used two more sessions of the same protocol (with the only difference that we now could work on her anterior neck from the prone position) and all initial symptoms were eliminated. Here is the video of our patient after the end of the therapy. As you may see her posture is completely normalized and the cough disappeared. These results were achieved with only three (!) sessions of Medical Massage 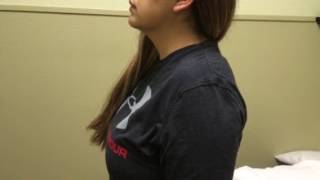 Let’s now reconstruct the chain of events and show how each player contributed to the initial symptoms. After 6 hours of driving from Phoenix to Los Angeles she spent the day on roller coaster rides with sharp turns and some extra G-pressure during dips. This is where the initial changes happened. They were additionally reinforced by the 6-hour drive home. Tensed middle back muscles put pressure at their insertions to the ribs and spinous processes. As a result, the rib cage didn’t expand equally during each inhalation, especially on the level 7-8 intercostal spaces. Pressure there increased tension in the intercostal muscle of these two intercostal spaces with following irritation of intercostal nerves passing between each two ribs.

As soon as pain started to radiate forward to the breast bone, making deep breathing, sneezing, laughing or coughing pure agony, the brain created changes in the body mechanics (changes in the posture) to diminish its bombardment by nociceptive stimuli from the affected tissues. This protective body posture initially decreased the intensity of pain formed in the brain but it additionally compromised the respiratory function of the chest.

Now let’s discuss the relatively rare component of the clinical picture. Because of the forced position of the neck and chest formed by the brain as a protective reaction, the patient after several days of suffering developed a so called neurogenic cough (Altman et al., 2015). In this scenario, the superior laryngeal nerve and phrenic nerves are mildly irritated by tensed anterior cervical muscles and they trigger cough every time extra inhalation is needed (laugh, deep breath, sneeze etc.) or pressure on the anterior cervical muscles elicited (by Medical Massage in our case).

The nature of the cough which readers may observe in the first video is very unusual. Please notice that the patient didn’t inhale before coughing out as usually happens during flu or a foreign object getting into the larynx. This type of cough wasn’t the result of the Cough Reflex to clean the bronchial tree, but rather, so called Expiration Reflex and cough in this case comes from the larynx itself and to be more precise from the superior laryngeal nerve which innervates the larynx and muscles which support it. Fig. 1 illustrates the position both branches of the superior laryngeal nerve have in regard to the larynx and trachea.

Notice how closely external and internal branches (underlined in red) of the superior laryngeal nerve are located to such hard, cartilaginous structures as a larynx and trachea. Therefore, the entire nerve becomes vulnerable if tension in the anterior cervical muscles increases and it pinches its branches against the larynx and/or trachea.

Tensed anterior cervical muscles may also irritate the phrenic nerve which is located very superficially on the anterior surface of the anterior scalene muscle, just under the sternocleidomastoid muscle. In the Fig.2 these three structures are underlined in red. 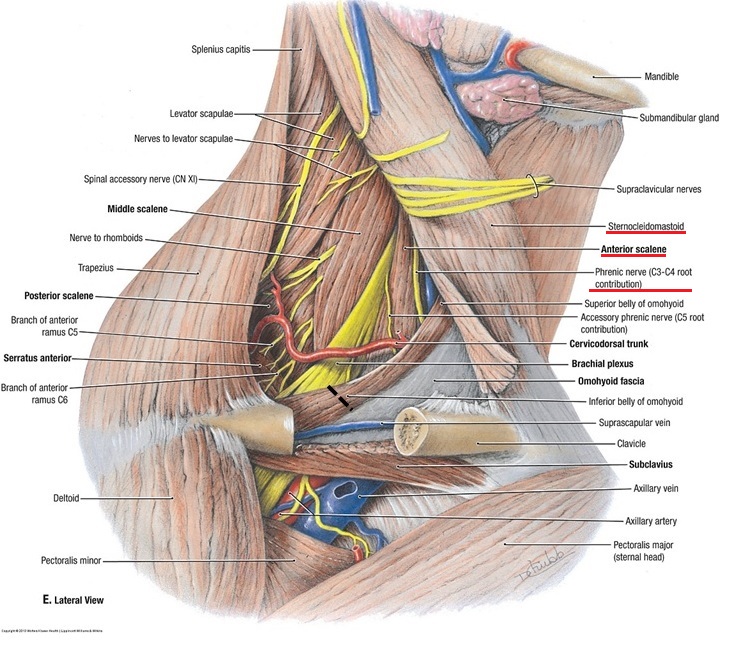 Fig. 2. Anatomy of the Phrenic Nerve

The phrenic nerve is responsible for the innervation of the diaphragm which must contract during each coughing effort. Unfortunately, the constant, low grade neurogenic cough additionally contributes to the tension in the soft tissues around the chest since the respiratory muscles are needlessly engaged day and night.

Thus, addressing the anterior neck to eliminate the neurogenic cough was the first necessary step in restoration of our patient’s health. As soon as the cough didn’t interfere in the treatment, removing tension in the soft tissues component of the chest was a relatively simple task.

We think this case is a great illustration of the so called ‘domino principle’ when more and more structures become involved, sometimes when the clinical picture is even 10 days old. It becomes even more prominent in chronic cases. If the therapist would like to be clinically effective, he or she should reconstruct the entire chain of events to achieve stable clinical results.