THE CLINICAL VALUE OF PALPATION

Two years ago, one of the PCPs who works with our clinic sent us his patient with a very unusual situation.

A 65 year-old female was walking out of the mall when she suddenly felt acute pain in her lower abdomen. From that moment, the pain started to bother her as soon as she started walking. If she was sitting she didn’t feel any discomfort. Pain also woke her up at night while she was turning. She didn’t feel any discomfort while she was laying still.

She was seen by a PCP, gastroenterologist, gynecologist, neurologist, rheumatologist and in several pain clinics. She was examined by X-rays, MRI, ultrasound, CT, colonoscopy, various blood tests and everything was within the norm.

At the moment of evaluation, the patient was on heavy pain medications which allowed her to move around at a moderate pain level. Finally, she was referred to our clinic for possible evaluation of soft tissue pathologies.

The patient was slightly overweight and walked with visual difficulties which increased while she was getting in a chair or prone. Evaluation of the lower back showed a large scar after extensive spinal surgery which fused two spinal segments: L4-L5 and L5-S1 several years ago.       My first idea was that scar tissue in her lower back was the initial trigger. However, the testing showed that there was no pain or other neurological symptoms associated with the area of the surgery. It seemed like a dead end since this area was also examined by other health practitioners and all tests confirmed it had nothing to do with her lower abdominal pain.

I asked the patient to turn on her back to examine soft tissues in the lower abdomen. The examination of the abdominal muscles didn’t give any clues since they were soft without any protective tension. Next, I examined the insertions of the abdominal muscles into the pelvic bones. When I palpated insertions of rectus abdominis into the pubic bones I felt a short and very unusual bone movement. I brought my ear to the patient’s pubic area (yes, it looked weird) and started to push on each pubic bone, alternating pressure, similar to pushing on piano keys. I clearly heard the sound of two bones rubbing against each other producing grinding sound. At the same time, the patient was telling me that when I did that it exactly recreated her pain.

Here was my train of thought:

3. She felt pain only when she walked or stood for some time

4. It wakes her up during the night if she turns

5. Palpation of pubic symphysis triggered pain and produced the noise of two bony fragments rubbing against each other.

The only explanation for all of these was a rupture of the patient’s pubic symphysis, which usually happens as a result intense direct trauma to the pelvis or after labor. The pubic symphysis is the fibrocartilaginous disk located between two pubic bones and it holds them together. It is also enforced by two ligaments on the top and on the bottom. Fig. 1 illustrates the anatomy of pubic symphysis and an X-ray of normal symphysis. Pay attention to the amount of space between the two pubic bones marked with a red arrow. It looks like a gap between two bones because cartilage is translucent on X-rays. 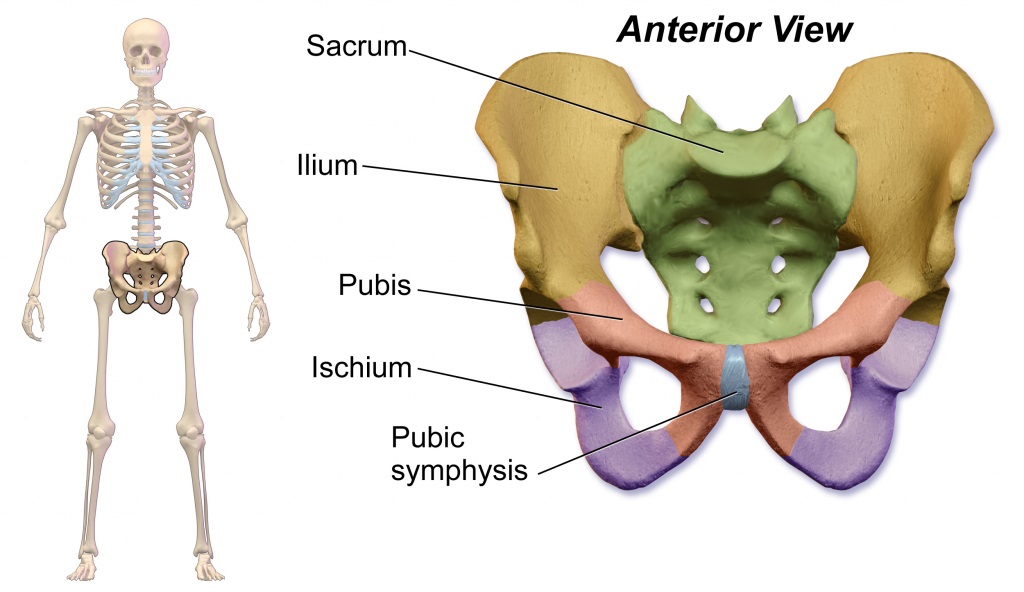 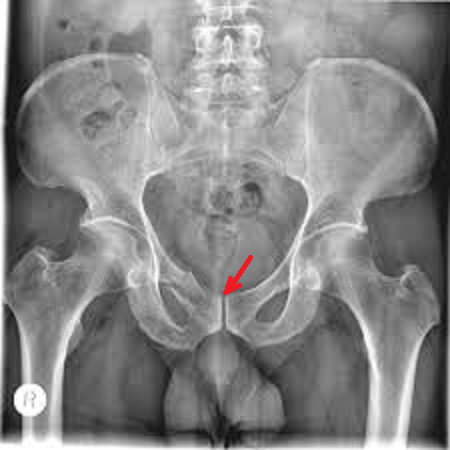 Fig. 1. Anatomy of anterior pelvis, pubic symphysis and a normal X-ray of the pelvis

During labor the fibrocartilage between both pubic bones softens and bones separate to let the baby through. If the woman’s pelvis is narrow and the baby is large, the pubis symphysis may fully rapture and both bones become separated. Fig. 2 illustrates an X-ray of a complete rupture of the pubic symphysis and the wide separation of pubic bones (marked by two red arrows). Compare it with Fig. 1. 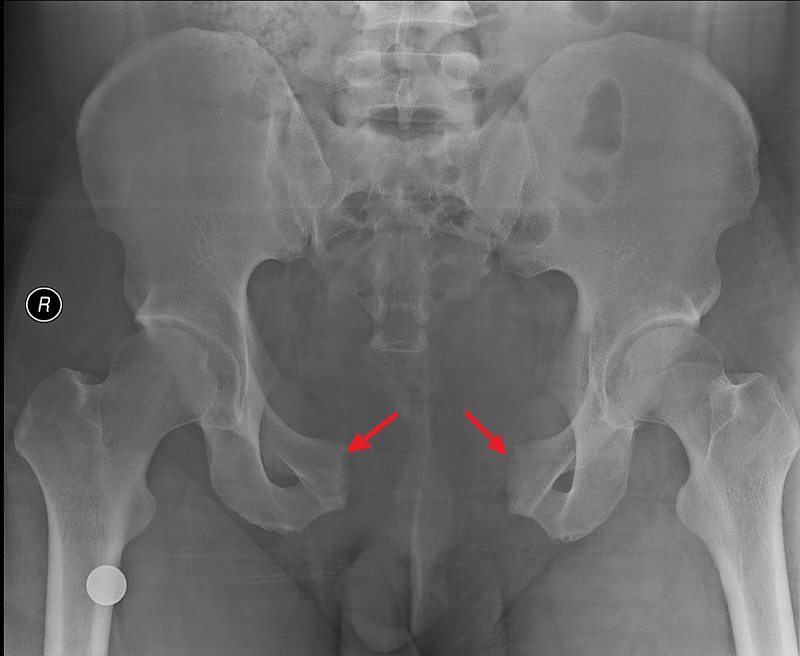 In another possible scenario, a woman gets up and walks, even going to work, too soon after labor, not letting the fibrocartilage between both pubic bones harden. That can also cause its rupture. However, that was not the case with our patient and it is very unusual to have rupture of pubic symphysis by itself. Also, this issue was already examined by pelvic X-ray and it was negative.

Still I informed her PCP about our findings. He referred the patient to an orthopedic surgeon with results of all her previous examinations and asked him to pay extra attention to the pubis symphysis. As the patient told me later, the physician walked in the room and without any palpatory examination declared that everything was OK with her pubic symphysis and that her PCP was wrong.

Her PCP physician was upset and sent her to another orthopedic doctor and personally called him to inform him about our findings and asked again for the specialist to concentrate on the pubic symphysis. As the patient later told me, the new orthopedic physician was also very skeptical since X-ray was normal but since he promised to her PCP to pay extra attention he sent the patient to do a dynamic MRI.

As soon as the orthopedic doctor got the results he called the PCP, telling him that he couldn’t believe but indeed the patient had broken pubic symphysis without any displacement of the pubic bones. This is why X-ray picture was normal since it was done with the patient comfortably on her back.

In her case the only solution was surgery, but since a case like this so rarely occurs, only a very small number of orthopedic surgeons in Arizona are actually doing this kind of surgery. He recommended his colleague.

The surgery was successful and even immediately after it, despite the postsurgical pain, the patient didn’t feel acute lower abdominal pain anymore. Fig. 3 is an X-ray of our patient’s pelvis after the surgery with the stabilization of the pubic symphysis by the plate with screws. In the upper part of the picture you may see metal fixations from previous surgery used to fuse two vertebral segments. 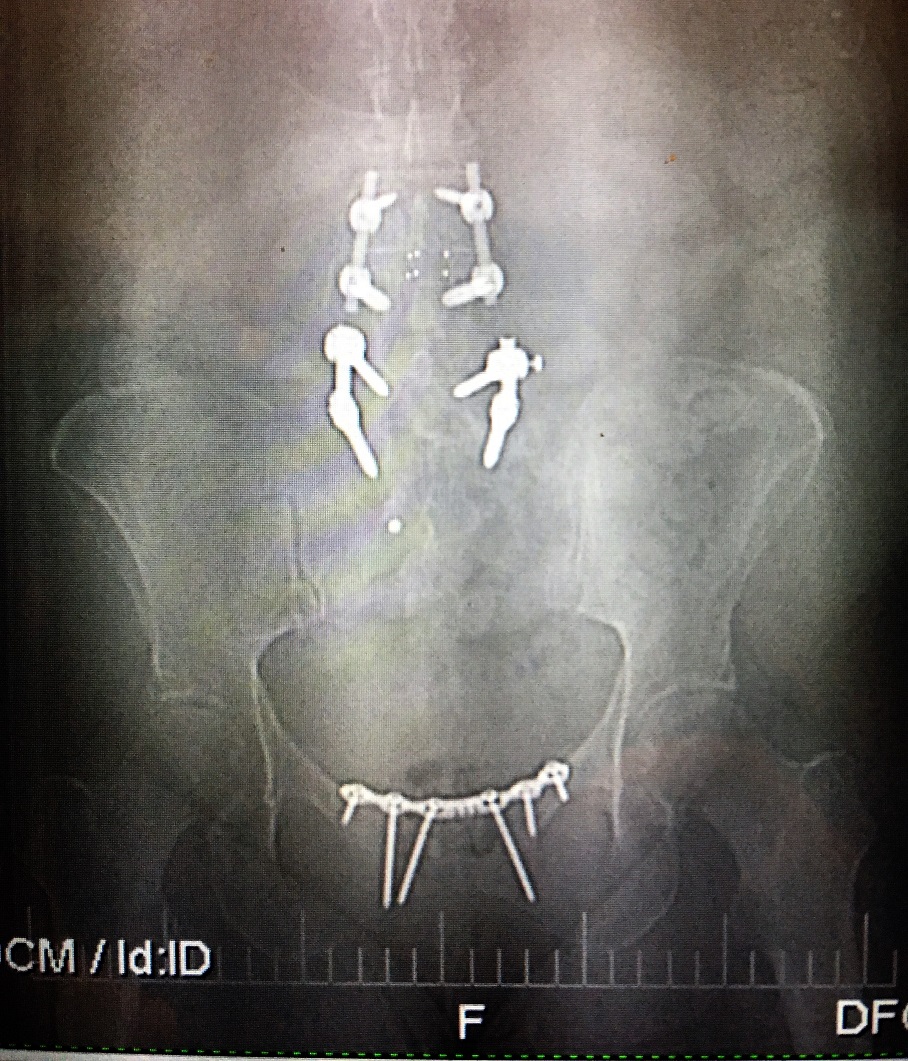 2. All studies missed the rupture of the pubic symphysis since the rupture didn’t cause complete separation of pubic bones and they were done with the patient prone and at rest. Only the dynamic MRI registered actual movement between the two pubic bones, which was undetectable by examinations before.

3. This is a very rare case and we share it with therapists to emphasize the importance of palpation which allows the therapist to send patients to other health practitioners for more sophisticated treatment options.

In this case, if there is no simple palpation of the area of pubic symphysis, the patient would have to remain on strong pain medications for the rest of her life until both bones become inflamed as a result of constant frictions and eventually separate. It will eventually require surgery but it may take years for this separation to happen. Thus, we think that this is great illustration of the value of simple palpation.