Recently I and my patient celebrated a 20-year anniversary of our victory over his debilitating condition. Rather than introducing this clinical case in “standard academic” format, I felt I should structure my presentation as a story, as this is indeed a story about how Medical Massage can change a person’s life.

20 years ago, Dr. Ross Turchaninov referred to me a 62 year-old man who suffered from intense pain in the right lower back, radiating to the lower extremity. According to the patient, his friend told him that similar cases were successfully treated by Dr. Ross in Arizona.  However, he couldn’t travel to Arizona, due to intolerable pain and was referred to our clinic.

According to the patient, for more than two months he had been suffering from excruciating pain, couldn’t walk and painkillers didn’t really help. The MRI found 7 mm L5/S1 disc herniation. The patient received several peripheral nerve block injections and 2 epidural injections without any relief. Because epidurals didn’t change the clinical picture and after his last steroid injection his blood glucose spiked, further injections were ruled out.

All physicians who examined him insisted on surgery as the only solution, including his friend, an orthopedic surgeon and the head of the department in one of the local hospitals. All doctors agreed that leaving things as is, without surgical intervention, would only make his condition worsen. During the evaluation the patient mentioned that his dad ended up losing his ability to walk, was bent forward and died in agony at the age of 85. At that time, the patient was 62, but was really scared he would end up like his dad.

After evaluation I became sure that there was a great chance that MEDICAL MASSAGE PROTOCOL would allow him to return to normal activities and I was very happy that I was right. With Medical Massage therapy we avoided the surgery and for the last 20 years my patient has functioned normally, enjoying a pain-free life. To this day, he runs his business, goes to the office on a daily basis, spends 45 minutes on a treadmill, and four times a week lifts weights. For the last 20 years, once a month, I’ve provided him the maintenance treatments.

The last time I saw him he told me: ”By the way, I was looking through my calendar yesterday and noticed that it was 20 years since I saw you the first time!” Having congratulated him, I added: ”…you are walking straight and without pain. Do you remember how afraid you were, thinking about ending up like your father?” He said: “Thank God, you were right!”

It just crossed my mind, and I asked him, how his friend the orthopedic surgeon was doing? Did he admit being wrong? He said: ”Regrettably, my friend is not doing well. He himself had a spinal surgery 16 years ago, and even today he continues to suffer from chronic pain and cannot fully enjoy his life. From pure curiosity, I asked: ”He saw your success with Medical Massage. Why didn’t he try treatment in our clinic?” The answer was: ”I don’t know, I begged him to give it a try many times, but without success.”

Now let’s discuss how the application of the MEDICAL MASSAGE PROTOCOL prevented surgery, eliminated pain, restored functional abilities, and sustained the results for many years.

The presence of a 7 mm herniation is a sign of significant disk destruction and in some cases, surgery is the only solution. However, the size of the herniation is only part of the problem. An equally important component is in what direction the disk leaked out. In one group of patients the disk directly compresses the spinal nerve against the vertebra. There is a second group of patients in whom the disk leaks to the side. Fig. 1’a’ illustrates a small bulging of L1 disk which may trigger a severe clinical picture since leaked material is in direct contact with spinal cord (black arrow). Fig. 1’b’ illustrates a large herniation (6 mm) which triggers significant symptoms, but has more chance to be successfully treated because there is space preserved between leaked material and spinal nerve (blue arrow). My patient had an almost identical situation to Fig. 1 ‘b’. 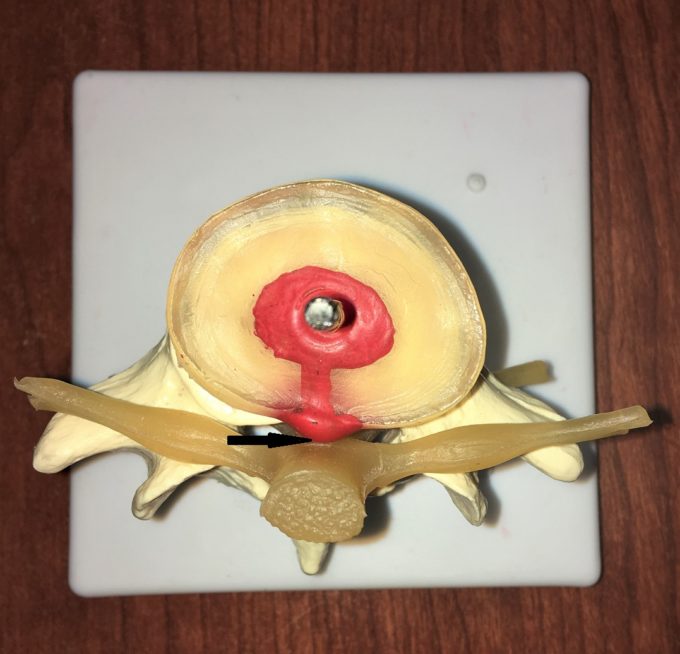 Fig. 1. View from above damaged disks. Mild bulging in central direction (a) and large herniation directed laterally (b)

The spinal nerves are vital neurological structures and as soon as the spinal nerve is even under the threat of irritation, the brain will form a so called protective muscle spasm which greatly contributes to the intensity of the symptoms and in many cases is responsible for their formation.

In cases of uncompromised reflexes, including absence of incontinence, motor insufficiency etc., specifically designed MEDICAL MASSAGE PROTOCOL not only prevents surgeries, but allows patients to come back to a normal functional life. During evaluation my patient didn’t exhibit such profound changes, but still significant sensory abnormalities (pain radiated down to his leg almost to the foot with a period of numbness and tingling) were present. The absence of motor insufficiency and presence of only sensory deficit gave me hope.

Evaluation of the soft tissues in his lower back showed significant buildup of tension within superficial and deep fascia, as well as in erectors and quadratus lumborum muscles. Application of even mild pressure during the evaluation triggered severe discomfort because the pain threshold in the tissues I examined dropped dramatically.

My first goal was to remove protective muscle spasm to actually see how bad the real symptoms were. I concentrated first on massage in the inhibitory regime, slowly restoring the threshold of activation of all peripheral receptors in the tissues of the lower back. As soon as I achieved inhibition of lower (in the spinal cord) and upper motor centers (in the cortex) I started to work with fascia using Connective Tissue Massage, Mobile Cupping and other fascia releasing techniques.

My education and personal clinical experience showed that only the efficient release of the tension in fascia allowed me to obtain results in elimination of muscle tension and restoration of muscular function. Normalization of the tension in the fascia allowed me to mobilize the erectors and QL muscles by performing various kneading techniques with following trigger point therapy passive stretching, and ice massage to reduce local swelling.

Although the goal of the first session was to decrease protective muscle tension as a first step in the long recovery process, to my and my patient’s pleasant surprise, his sensory abnormalities down to his leg almost immediately started to fade away. For me it was clear evidence that I was initially correct in my assessment that despite 7 mm herniation present, the immediate cause of his symptoms was protective muscle spasm which additionally increased pressure within the spinal canal. Elimination of protective muscle spasm would eventually allow me to decompress the L5-S1 segment and restore functions.

Overall it took me 11 Sessions of Medical Massage to eliminate his pain and suffering while completely restoring functions. Yes, the patient still comes in for monthly supportive therapy since the herniation is still there, but we are able to successfully control it and prevent it from worsening. For this and other patients with similar problems Medical Massage must be used as a FIRST treatment choice and only after it fails completely should more aggressive treatment options be considered. Unfortunately, this is not a clinical reality yet and patients frequently end up with symptoms my patient’s friend still suffers after 16 years.

In conclusion: It doesn’t matter how big the disk herniation is. If the patient doesn’t exhibit severe motor deficit and signs of failure in the pelvic organs (incontinence, significant abnormalities in bowel movements, decrease of blood flow to penis, etc.) Medical Massage which is based on clinical science should be used as the FIRST treatment option.

Dear colleagues, I would like to finish this short article by saying, how blessed we are to be massage therapists and to be able to change peoples’ lives when all other modalities have failed. I will be happy to answer questions and comments.

PS. While I was working on this article, unexpected follow up developed. My patient’s friend, the now retired orthopedic surgeon who was unsuccessfully operated on 16 years ago, called and would like to visit our clinic for initial consultation. Despite that he lost a lot of time I am excited to see how Medical Massage can help him after all these years. I will keep you posted with further developments.

2. Intervertebral disk herniation, even to the size of 7 mm, is not contraindication, but rather indication for Medical Massage therapy. However, the practitioner must deliver results, otherwise it becomes a waste of time and patient’s money while degrading the Medical Massage Concept in the eyes of other health practitioners and the public.

3. Any patient with any pain syndrome first of all will exhibit protective muscle tension. This is a normal and expected reaction of the brain. Very frequently therapists are taught and try to correct consequences of protective muscle tension and clinically speaking it is a mistake which allows only a patch for the problem instead of its elimination. One of the frequently mentioned examples of that is so-called various core distortions and their therapy without addressing the cause of such distortions.

4. The corner stone of any clinical application of massage therapy is the ability of the practitioner to correctly identify the initial trigger and target that instead of secondary symptoms which need to be and should be addressed later. This case presented by Boris is great illustration of that.

To find out more: here is the link to information of Boris Prilutsky’s  DVDs, where he presents hands-on protocol implemented in the presented case https://medicalmassage-edu.com/product/volume-1-3/