It would not be trivial to say that the opioid epidemic is taking over the country. According to new data published by Prof. A. B. Krueger from Princeton University, it is one of the factors in the lowest labor force participation in 40 years. Right now, the US ranks second to Italy in the lowest percentage of labor force participation among developed countries. The numbers are simply staggering.

We need to use every possible tool to combat the Opioid Epidemic and Medical Massage in many cases is an irreplaceable clinical tool. This clinical case that was sent to us by SOMI’s former student Curt Lezanic from San Antonio, Texas, is a great illustration of that.

Three months ago I was contacted by an 81 year-old male who was suffering from severe back pain.  He arrived at my office and we talked about what was going on.  He told me that he had had a total of three spinal surgeries over the course of several years.  The final surgery which was performed a little over ten years ago, resulted in the placement of two metal rods and five metal plates in the lumbar spine.         Unfortunately, none of the surgeries resulted in the elimination of his pain.  After all physical therapy failed to resolve his symptoms, he was referred to a pain management clinic.  He ultimately was prescribed an opiate to manage his pain.  He was taking four pills of Hydrocodone per day and was doing monthly blood testing to check his kidneys functions.

I asked him to lie on my table so that I could evaluate him.  I pulled up his shirt and immediately noticed that his skin was reflecting light and upon touching the skin found it to be as rough as sandpaper.  I immediately knew that I was facing a very active cutaneous reflex zone.  The picture below shows distribution of reflex zones in the skin. Round circles are areas of hypersensitivity during the application of the Sensory Test while elongated area represents complete loss of sensitivity to touch. 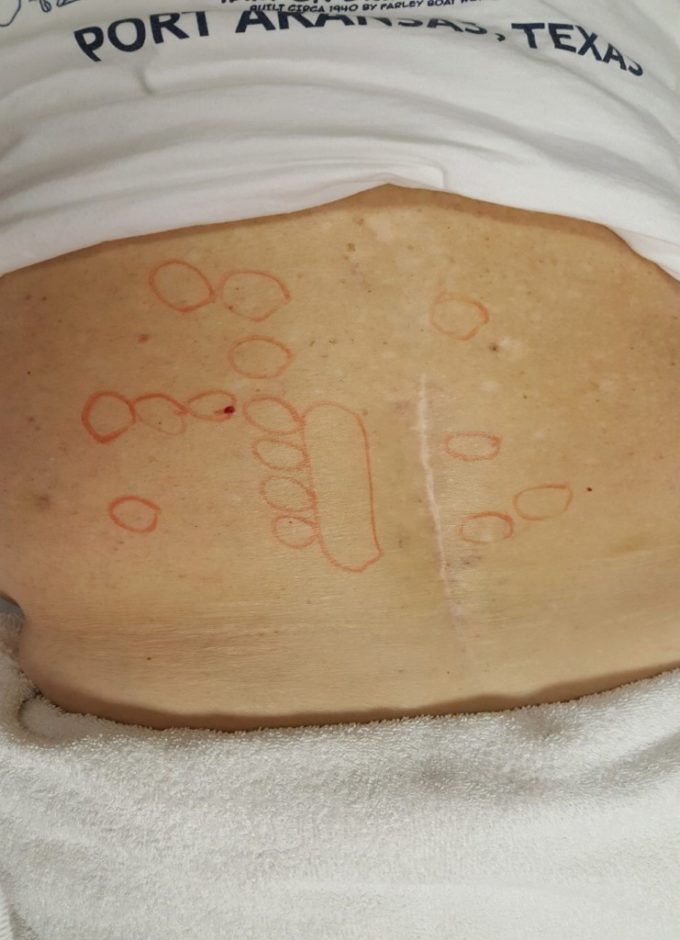 The patient called me that night and we scheduled an appointment time that was based on the half-life which is 4-5 hours plus one hour.  As you can see in the picture below, the cutaneous reflex zone was much more dramatic when he arrived the next day. At this point I also examined his superficial fascia and it exhibited significant adhesions to the skin in the same areas and especially around the scar. Deep fascia also was extremely tight, restricting lateral shift of lumbar erectors and ‘gluing’ them to the quadratus lumborum muscles. Periostal reflex zones were active at the insertions of the soft tissues into the sacrum, both iliac bones and spinous processes of lumbar vertebrae. 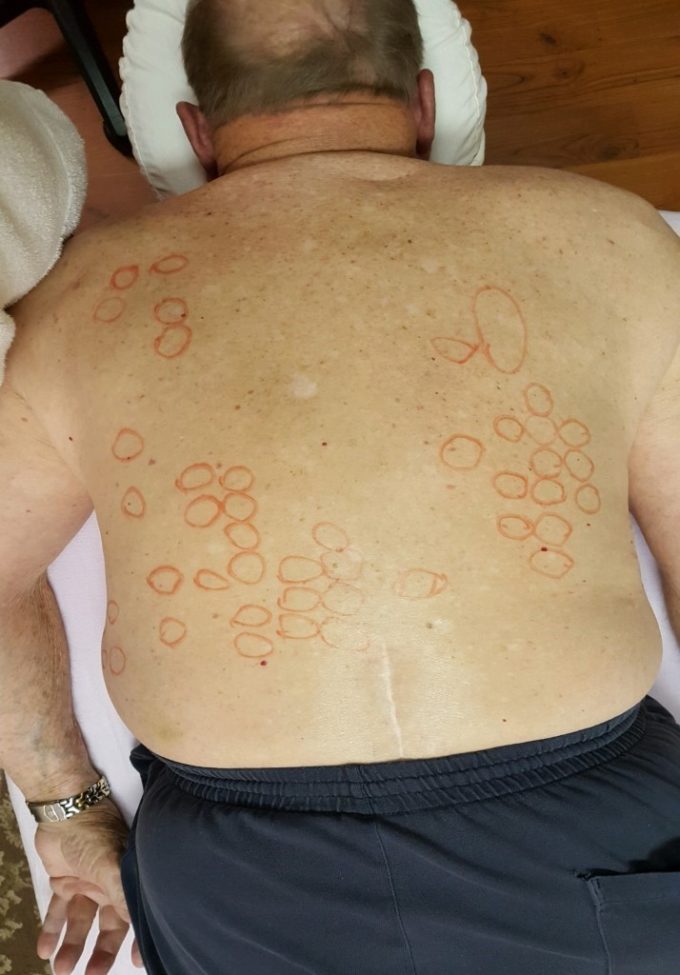 Considering the intensity of the pain and widespread distribution of soft tissue tension on multiple levels I decided to start by addressing the reflex zones in the skin and superficial fascia first.  I used skin kneading and stretching, superficial friction, Connective Tissue Massage strokes and Opposite Shift Techniques. To my complete surprise after approximately thirty minutes the patient got off of my table and said for the first time in decades he was experiencing ZERO pain.

I told him that he was still under the influence of the medication and there was much more that we would need to accomplish to completely resolve his issue.  I told the patient to call me in three to four days to give me an update on his status.  I also told him to begin to put more time between pills so that he could better identify his pain pattern.

Three days later he called me to report that he had experienced minimal pain, but he had to continue to take hydrocodone because he experienced withdrawal symptoms when he started to decrease dosage. I suggested he see his pain doctor to adjust hydrocodone dosage.

Meanwhile, we continued to work on his back addressing more and more tissues including Lumbar Erectors, Quadratus Lumborum muscles, periosteum etc. The more time he put between his pills the more pain he felt.  Initially, I would get almost panic calls from him about pain coming back again with the same ferocity.  I would get him in right away, control the pain intensity and reduce his mental anguish.  Slowly those types of calls dramatically decreased.

It has now been three months I have been treating him.  The patient with the help of his pain doctor has been able to gradually reduce the number of pills that he has been taking from four pills to one pill per day.  He now comes into the office about every two to three weeks with me controlling his pain while he continues to slowly get off the hydrocodone.

With the help of Medical Massage my patient is basically winning his battle with pain and opioids. He already has sent me seven new patients.

1. We should pay attention to the medications that patients are taking. Opioids are one of our major enemies since they dramatically slow down the entire rehabilitation process.

2. We should consider knowing the half-life of the medication (pain medication, statins, hormones) before we make any soft tissue evaluation and design treatment protocol.

3. Don’t rush with the therapy if opioids are part of the problem. Build up clinical response slowly. Be sure that you find time to immediately step in if the patient needs assistance when he or she goes through the withdrawal process.

4. Medical Massage gives exceptional results since it addresses pain by itself and it also targets pain’s initial trigger. From this perspective, clinical training from the Science Of Massage Institute is an irreplaceable educational source. It forever changed my practice and lives of my patients.