Theresa Brumble, LMT is close to graduating from our SOMI Medical Massage Program. She recently opened her own clinic where she actively practices MM as part of an integrative approach to somatic rehabilitation.

During the time we worked together Theresa grew tremendously as a therapist and also as a clinician. This case she submitted to JMS is a great illustration of Theresa’s ability to gather clinical data and correctly interpret it to develop an individual treatment strategy.

This clinical case was very important to me. My patient is a longtime friend for more than 30 years. She has suffered from tension headaches for most of her adult life. A little more than 10 years ago she was treated by a local neurologist who prescribed Topomax, a nerve pain reducer used to prevent migraines. She also used Relpax to treat migraines. She is very health conscious and did not want to take prescription drugs any longer. She has been on these 2 drugs for more than 10 years.

She learned of my recent training with the Science of Massage Institute (SOMI) while I was treating her knee with a combination of Medical Massage and deep tissue laser.  I had just received SOMI’s training for Chronic Headache due to Occipital Nerve Neuralgia and she wanted to give it a try after having suffered for so long.

My patient works from home and sits at a desk for about eight hours a day.  She takes breaks periodically, but seems to always have headaches and neck pain.  Mostly the pain was concentrated in upper and mid trapezius which radiated to her left shoulder and up the back of her head. Her ROM was limited flexion and with rotation to the left.

Initial evaluation of the skin using the Dermographism Test indicated an overactive parasympathetic division of the autonomic nervous system. Tissues over upper shoulders and neck were really warm to the touch and puffy.

Examination of the connective tissue zones

The Kibler’s Technique, which is a resistance to skin’s vertical lift indicated the presence of tension in superficial fascia which covered fibers of the upper and middle portions of the trapezius. The Dickle’s Technique with prominent ‘Orange Peel Sign’ confirmed the same findings on the left side along the trapezius muscle.

Examination of reflex zones in the skeletal muscles

The patient’s upper and middle portions of the left trapezius were more prominent and appeared almost swollen. Her left shoulder was elevated more than the right.

Wartenberg’s test was positive for the tension in the Anterior Scalene muscle especially on the left. That can be a contributing factor to trapezius muscle tension.

Further evaluation of muscle tension confirmed the presence of active trigger points in Trapezius, Splenius Cervicis, Multifidus, Levator Scapulae at the distal attachment and muscle belly superiorly, as well as Splenius Capitis and clavicular head of the Sternocleidomastoid.

I began her treatment on March 26, 2018 which included deep tissue laser therapy for 4-10 minutes on the entire upper back and neck posteriorly and anteriorly. The laser protocol for headaches states every other day for two weeks then evaluate.  I added my newly found knowledge of Occipital Nerve Neuralgia after laser therapy.

I began treating each layer of tissue with effleurage, cupping, Graston and deeper kneading to soften the tissue.  I also used electric vibration to the trapezius and erector muscles to release active trigger points. Her periosteal trigger points were very painful on the first visit especially at the trapezius attachment to the occipital ridge.  I won’t describe MM protocol for Chronic Headache since it can be reviewed in previous JMS publications. Here are links:

After two visits, her headaches were reduced in intensity and frequency.  By visits five and six, she was happy to report she had zero headaches. However, she was still taking Topomax. After two weeks, we determined that we would extend her treatments to one time per week.  She was very faithful with her homework stretching routine. We also adjusted her work environment to be ergonomically correct and made a few other adjustments.

After two weeks of once-weekly treatments, she only complained of one headache. Her periosteal trigger points were no longer active and the tension in the trapezius reduced substantially. At this point we switched to one treatment every two weeks. After the second visit, she had zero headaches!

She went to her neurologist with the information of our treatment and requested to come off of her Topomax. The doctor started reducing her dose. We extended treatment again to 6 weeks due to scheduling. In that time, she was totally off Topomax and reduced her Relpax substantially, which was only as needed and occasionally replaced with Tylenol.

She now sees me for maintenance visits every six weeks. She is off her Topomax and uses Tylenol for intermittent headaches. There is no original tension in fascia as well as reflex zones in the skeletal muscles (especially trapezius) and periosteum. Both divisions of her autonomic nervous system are now balanced. She may have an occasional headache now and then, but they are usually from sinus issues.

I was so very grateful to be able to use my knowledge to help my dear friend! Thank you so much.  I have the utmost respect for Dr. Ross Turchaninov for bringing this knowledge to the United States and sharing it with us. We are all now better equipped to help our patients out of pain!  I’m so grateful to have had the opportunity to learn and continue to learn from him! 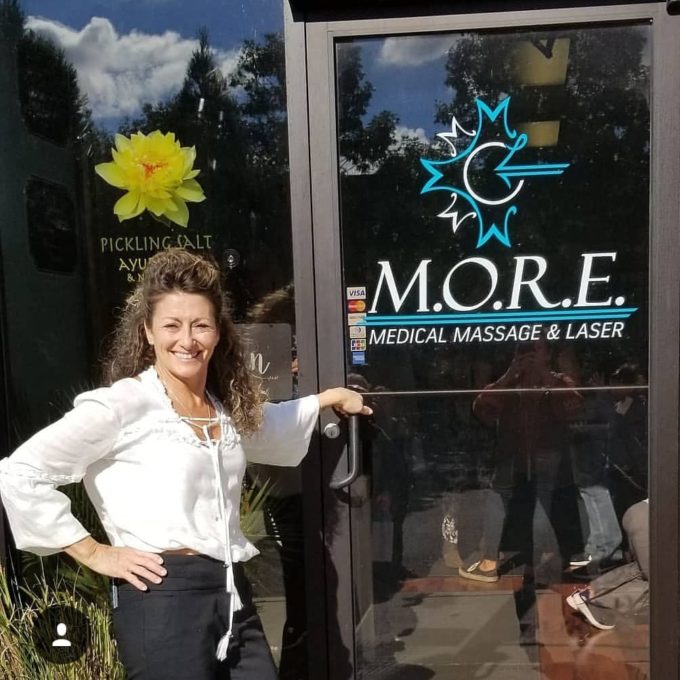 Theresa Brumble, a Licensed Massage Therapist from Northfiled, NJ. She worked previously as a CAT scan/ MRI technologist for 20 years. Finally she realized that she can help patients more and she went to massage therapy school. She quickly realized that she wanted to be on the therapeutic or medical side of body work.

“I purchased a Class IV Deep tissue laser for pain over 2 years ago and that changed my practice, but I didn’t realize until I went to my first SOMI Medical Massage seminar that I could actually improve the quality of life for my patients! I now use MEDICAL MASSAGE PROTOCOLs combined with deep tissue laser to help people in pain! I have been able to rid people of decades of headaches. I have helped to rehabilitate shoulders, knees and other joints quicker after surgery. I have even kept people from surgery. I use MEDICAL MASSAGE PROTOCOLs to reverse herniated discs in the lumbar spine. I have worked with patients from 9 – 91years of age. Medical Massage incorporates Lymphatic Drainage, Therapeutic Massage, Trigger Point Therapy, Cupping, Vibration and Stretching Techniques, etc., to rejuvenate each layer of tissue! The laser reduces inflammation, increases blood flow and heals on a cellular level! The two combined are amazing for all sorts of pain!

I just opened my new office, MORE Medical Massage and Laser in Somers Point. I have a few classes left before I am the only Certified Medical Massage Practitioner in the area! I am so excited to start this new chapter helping people out of pain!”