This Case of the Month is contributed to JMS by Mike Devo, LMT from Chicago who recently graduated from SOMI’s Medical Massage Certification program. From the very first seminar Mike took, it was obvious he had great promise to be an excellent Medical Massage practitioner. He was very thoughtful, paid attention to details, which are so important in MM practice, and took his time to move forward while immediately testing on his clients the clinical information he learned from SOMI.

This clinical case is a great illustration of Mike’s professional success, his ability to solve complex cases and help patients who sometimes have lost the hope to recover.

Recently, one of my regular clients had a bad ladder fall in her garage and she injured her head, arms and right thigh and buttocks. She went to the local clinic initially who sent her to the hospital for X-rays because of the blow to the head. Luckily, they were negative. While she sustained some minor cuts and trauma on her hand the most significant and painful injury was the large contusion she sustained on her right thigh and buttocks.

The area was very painful to the touch for the first few days and it was over a week before the pain eased up somewhat and she came in for treatment. I took a picture before our first treatment (see Fig. 1 below). She said it was actually worse before. 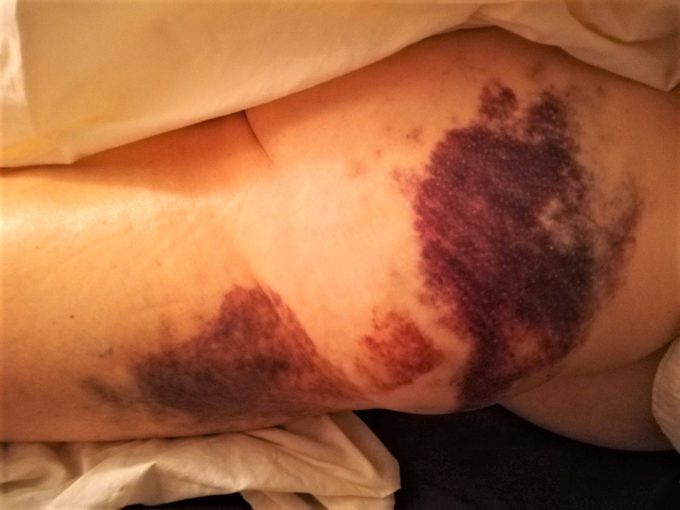 I asked her if she did not mind, I was going to take my time and use some new techniques on her I learned in SOMI’s Medical Massage Seminar. As luck would have it, I just took Dr. Ross Turchaninov’s class on soft tissue trauma and MEDICAL MASSAGE PROTOCOL to deal with it a few months back. Now, I could put that new training into practice.

I do a lot of lymphatic drainage in my daily practice. However, I would have shied away from working on a hematoma of this magnitude in the past. She trusts my work and agreed to whatever needs to be done to help the healing process.

I explained to my client that the light-colored area in the middle of the hematoma is where the brunt of the trauma occurred – the epicenter of the impact if you will. This caused the explosion of ruptured blood vessels and bleeding into the surrounding soft tissues to occur giving the tissues the darker color. Thus, the main area of the impact was on the right buttock with secondarily areas formed down the right thigh. These areas suffered secondarily due to blood flow from injured capillaries directed down by the force of gravity and continuing contractions of the injuries muscles before her coagulation system was able to stop bleeding. All soft tissues below the area of initial impact became saturated with coagulated blood.

Palpation was very painful and soft tissues in the area of hematoma were very hard, almost like a rock and very warm to touch. Starting with palpation from normal colored tissues I slowly moved closer to the area of impact, detecting the demarcation line which is the border between normal tissues and the first sensation of firmness in the soft tissues due to blood saturation. Detecting the demarcation line gave me a sense of how to direct my treatment strokes to help soft tissues recover faster. If a hematoma of this size isn’t treated properly, it may organize and forever change the elasticity of the soft tissues. Organization of hematoma means the deposit of collagen fibers inside of the tissues saturated with blood and formation of a rigid network of scar tissue.

Even though we began treatment past the initial period (24-48) hours, I started the session with some abdominal lymph drainage pumping techniques. I thought it would still have a positive effect before draining the right leg.

I performed LD on the left unaffected leg first. I followed that up with LD strokes directed to the right Inguinal lymph nodes on the right side, and after that worked with gentle strokes around the contusion. Switching the client to the prone position, I did some general TM and Swedish on the left unaffected leg first, including Effleurage With Unequally Distributed Pressure.

Moving to the right leg I started work on the main contusion on the right buttocks. Starting from the proximal periphery of the contusion on buttocks all the way to the upper thigh directing LDM strokes to the right inguinal nodes (See Fig. 2 ‘1’). In the more distal areas, I directed the LDM strokes against lymph flow first and later around the contusion, but not through it (see Fig. 2 ‘2’). As Dr. Ross explained there is too much damage to the lymphatic vessels’ walls and now, they are unable to drain the remnants of damaged cells, inflammatory debris and hematoma itself. That is why it is more efficient to create a detour of drainage around the contusion even if it goes against the main direction of drainage. This was a totally new concept to me. I think it greatly enhanced the recovery time in this case. 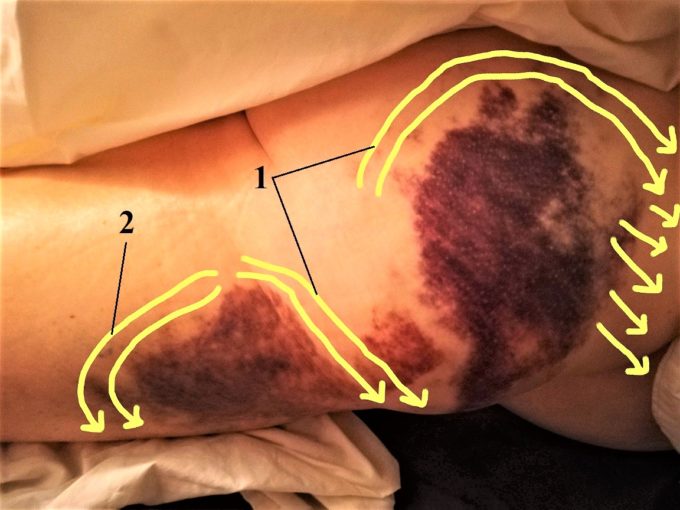 Fig. 2. The direction of strokes I used to drain the hematoma

By our second session, the firmness of the contusion had decreased by fifty percent. The tissue in the area of hematoma became more mobile as well – not hard as a rock during our initial session. I performed the same steps as the first session.

Moving to the main area of the contusion on the right buttocks, I used circular strokes working from periphery to the center of the hematoma and then back out again in the opposite direction. I continued with horizontal strokes from center to periphery. Since we were well past the acute stage, I was able to increase my horizontal pressure with lateral shift and the client was not feeling any pain or discomfort. I performed the same therapy on the secondary hematoma on the right thigh. At the end I applied some permanent electric vibration in the direction of drainage in both areas.

By our third session, the improvement in the injury site was remarkable (see Fig. 3). Just some lingering areas on the right buttocks. I continued the same protocol but in a more limited roll this visit. I was able to add a full body stress relief massage for my happy client. 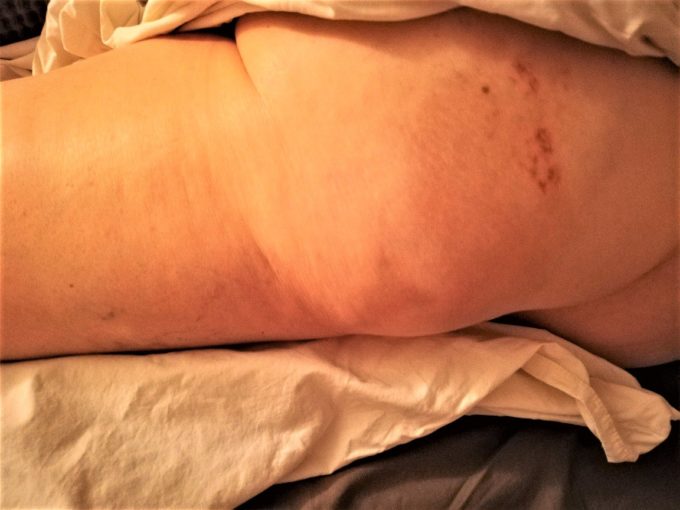 Full disclosure – my client also had several acupuncture visits for pain and stress levels in between our sessions. She also spent time in the therapy pool which I feel helped in her recovery. I always encourage other therapies to help in the recovery process but MEDICAL MASSAGE PROTOCOL for soft tissue contusion was the main treatment tool which helped my client with a quick recovery. 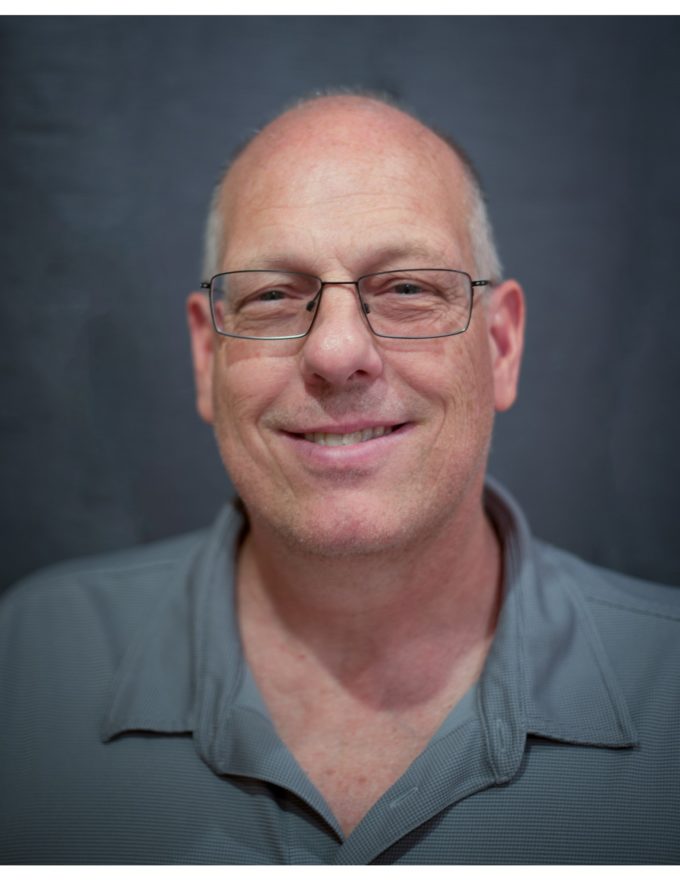 For 29 years Mike worked as a delivery driver for UPS. This was an extremely physical job and he had his own share of back, neck and shoulder issues. He had always been interested in the field of massage therapy as a second career. In 2009 Mike completed massage school while still driving full time. It was during this time that he developed Thoracic Outlet Syndrome. He tried orthopedic physical therapy with no luck so he sought out help from a chiropractor who also did massage therapy. After one session of releasing the scalene muscles, the TOS was 50% better. After three sessions it was completely gone. That was a huge ah-ha moment for Mike and from that experience, he made it his goal to pursue a career in Medical Massage.

Mike’s next break came in a chance phone call to Boris Prilutsky, one of the true pioneers of bringing Medical Massage to the United States. This call led to Mike forming The International Medical Massage Association in an effort to bring therapists Like Boris and others to Chicago to teach Medical Massage. This proved a little more difficult in reality than on paper. While organizing a successful class with Boris in Chicago was great, it took a lot of time to be a promoter instead of focusing on his real desire to be a therapist. It was through this relationship with Boris that Mike learned of Dr. Ross Turchaninov and his SOMI certification program. This was exactly what he was looking for. Boris and Dr. Ross use many of the same methods they brought with them from Ukraine. It was a natural progression for Mike. He found it to be very humbling to work, learn and train with such experienced Medical Massage therapists. Mike hopes to use this knowledge and training to spread the word of Medical Massage and its power to heal. Someday Mike hopes to train and teach other therapists to carry on these methods.