S-SPINE VS J-SPINE: IS THERE ANY MERIT IN THIS DISCUSSION? PART II

In Part I of this article we outlined the topic of S-spine and J-spine and degree of curvatures associated with them: https://www.scienceofmassage.com/2019/06/personal-opinion-s-spine-vs-j-spine-is-there-any-merit-in-this-discussion-part-i/

Let’s now concentrate specifically on the subject of curvatures and find out if our discussion in Part I carries any support from medical and scientific sources.

As a reminder, let’s look again at two spine models with S-spine or ‘normal’ set of curvatures and a J-spine with flat or ‘abnormal’ curves. 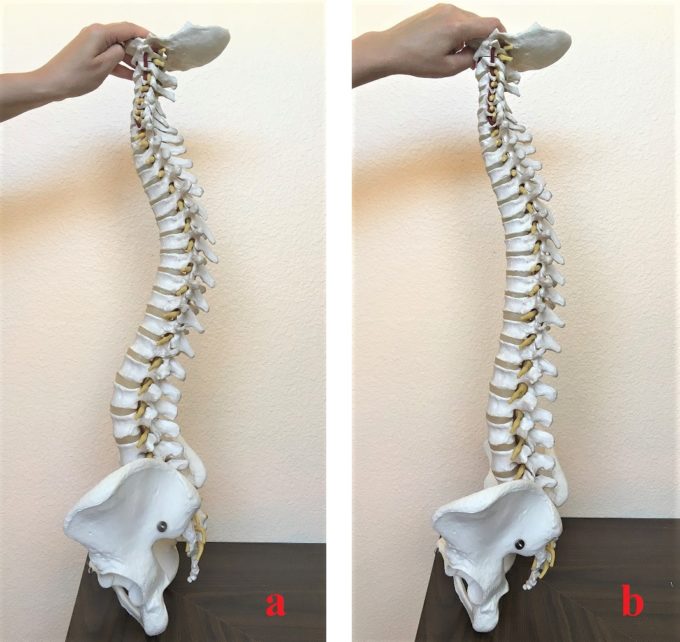 Our fist video below presents the behavior of the S-spine with larger curvatures when it absorbs the impact of vertical compression load.

Our second video presents behavior of the J-spine with smaller curvatures when the same vertical load is applied to it.

Our final third video presents the basic arrangement of the vertebral segment (two vertebrae and intervertebral disk in between) and its behavior inside of large and small spine curvatures.

SUPPORT FROM THE SCIENCE

Here are the results of several studies which support these observations. Notice that articles are relatively recent since this issue has just lately come within the radar of scientists.

1. Shirazi-Adl, et al., (2002) clearly demonstrated that flattening in the lumbar lordosis and increase in posterior pelvic tilt are keys in optimal posture. Both of these factors greatly diminish excessive engagement of the lumbar muscles which additionally decreases the compression load on the intervertebral disks and spreads the load more equally throughout the disks.

Conclusion: With flatter curvatures, the shock absorbing abilities of the spine itself are fully engaged with lesser help needed from the neck and back muscles to counter-resist vertical load.

To the contrary, the vertebral column with larger curvatures is unable to provide full shock absorbing and cervical and lumbar muscles become constantly engaged, especially in cases of repetitive vertical compressions (e.g., running on a treadmill).

2. Meakin et al., (2008) used an upright positional MRI scanner to acquire lateral images of the lumbar and lower thoracic spine of 24 subjects. The subjects were imaged in standing positions while 0,8 and 16 kg of load was applied across their shoulders using apron.

Conclusion: So-called ‘J-spine’ configuration gives the vertebral column a unique biomechanical ability to additionally straighten itself while that vertical load is applied. The only option S-spine has to protect the disks and avoid their damage is to additionally increase already large curvatures. In such case the entire spine sinks under the pressure to absorb the impact of vertical load.

Why instead of sinking under the vertical load the vertebral column in people with lesser curvatures does the opposite – straightened itself? The answer is in the results of the study below.

3. Pavlova et, al., (2014) using modern equipment first established the median lower back shape and determined deviations from the baseline with larger and lesser curvatures. In subjects with larger lordosis (lordotic curvature 30 degrees and above) the lower back muscles work harder trying to diminish the degree of initial lordosis.

At the same time in subjects with lesser lordosis, the lower back muscles don’t do any extra work trying to diminish large curvature and as a result the pressure is distributed more evenly within the entire vertebral column.

Conclusion: Results of this study greatly support the idea that S-spine is a deviation from the original J-spine. I would like readers to pause for a second to fully acknowledge the importance of the following statement: in people with larger curvatures, or what we called normal or S-spine, their own brain, using muscle support, is constantly trying to correct and decrease these curvatures! This is why people with larger curvatures have more pain in the lower back and neck. Neck and back muscles are working double shift trying to diminish large curvatures associated with S-spine every time we are running, walking or jumping. The chronic tension in the back and neck muscles in combination with incorrect distribution of the vertical load through the disk are the main causes of the disk abnormalities.

To the contrary, the vertebral column of the people with less curvatures spread vertical load through each disk more evenly. At the same time neck and lower back muscles are able to support smaller curvatures by additionally straightening them while the vertical load is still applied! People with large curvatures are lacking this important mechanism of shock absorption.

IMPORTANCE OF THE SPINE ARRANGEMENT FOR THERAPISTS

It seems the topic of S-spine vs J-spine is an abstract issue for therapists. In reality, it is very important for everyday practice from stress reduction massage sessions to clinical application of massage therapy. If the concept of smaller spine curvatures is more beneficial than what we considered normal curvatures of S-spine than:

1. All techniques which target ‘restoration’ of the cervical or lumbar curvatures from flatter ones, especially in younger patients, should be abandoned.

2. During any treatment the client/patient must be positioned to flatten the curvatures. In position on the stomach the pillow should be placed under the belly to flatten the lumbar curvature and bolster under the feet. The cratel which supports the neck should be lowered.

In the position on the back folded towel or small pillow (depending from the size of cervical lordosis) should be placed under the occipital part of the head and bolsters under the knees which are slightly spread in mild outer rotation.

3. For homework to be effective the patients with any upper or lower body pain and dysfunction should at least temporarily avoid any exercise or stretching which requires neck or lower back extensions. They will increase degree of the cervical and lumbar lordosis.

4. Any exercise to strengthen posterior cervical and lower back muscles can be conducted only after pain and tension are eliminated.

DECOMPRESSION OF THE AFFECTED VERTEBRAL SEGMENT(S) WITHIN THE CURVATURES

Abnormal pressure within each vertebral segment is a result of three major forces acting on the segment: weight of the body, force of gravity and supportive pressure of the soft tissues, especially layers of powerful muscles.

There are other components which are also contributing factors and they are equally important (e.g., protective muscle spasm developed by the brain secondarily, facet joints fixation, ATP shortage, etc.).

However, if we are talking about the initial triggers there are these three factors and their imbalance are main contributors to gradual increase in vertical pressure which results in the disk trauma and degeneration. That brings us to common framework of the soft tissue therapy for patients with disk bulging and herniations.

Yes, in an ideal scenario each patient with disk abnormality should solve the extra weight issue if it is present and indeed it can be a decisive factor to avoid further progression of disk pathology, expensive therapies and eventually spinal surgeries. We regularly observe these miracle cures of our patients who made the efforts and took charge of their own health. However, it is not a quickly achievable goal and the patient in pain simply doesn’t have time to do it and can’t do any exercises because of pain present. In such case weight control becomes obligatory, but a future project.

We can’t remove the force of gravity from our lives, but we can temporary diminish its impact on the affected vertebral segment with light repetitive exercises in the swimming pool. Thus, for the treatment to be successful, and in the future as a preventive measure, all patients with disk pathologies should use light repetitive exercise in the swimming pool. In an acute stage even floating or walking is enough.

Why is this component so important? As we know, despite that each vertebral segment innervates separately, all soft tissues especially skeletal muscles on the right and left side are constantly communicating with each other via the same spinal segment. Thus, in the normal scenario right and left sides are working together as members of the same team. If, the right-side muscles contract the left side will relax to let movement happen.

In a patient with disk pathology the brain creates a very sophisticated system of guards and blocks to protect spinal nerve from any additional irritation or damage. The smaller impact of the gravity in the water allows the side which carries less protective tension to diminish and control the protective spasm in the muscles on the more affected side.

An additional benefit of repetitive pool exercises is restoration of ATP (muscle fuel) storage and production due to the increase of blood perfusion in the water since blood flow also is affected by the force of gravity.

The third part of the initial treatment is decompression of the soft tissues around the vertebral segment using a layer by layer approach to somatic rehabilitation. Let us in the following video illustrate the impact of soft tissue decompression on the intervertebral disk using the analogy of a toothpaste tube. This analogy can be also used by the therapists to explain the patients what happened to them and importance of soft tissue rehabilitation to promote recovery.

Thus, the ultimate decompression of the vertebral segment and avoidance of spinal surgery requires a special program of rehabilitation when abnormality is attacked from all possible directions. Yes, MM is the first step in the decompression of the soft tissue component, but other modalities (spine manipulations, acupuncture or dry needling, prolotherapy, epidural injections etc.) must be used as well to help in obtaining stable clinical results and save the patient from an unnecessary surgical procedure.

One final piece of clinical information to consider. Disk abnormalities are the only pathological conditions in the human body which get better with age. The aging is accompanied by gel of nucleus pulposus to dry out and it creates a condition called natural fusion. The outcome of it is exactly what the spinal surgeon is trying to achieve with surgery – stable fusion between the vertebrae. The only difference is that with pain free aging fusion between affected vertebrae becomes a natural process and it is the therapist’s job to keep the patient out of trouble, regularly unloading the soft tissue component and eventually letting natural fusion happen.