Radical mastectomy affects the female body in many ways. Because this surgery greatly impacts the patient physically, emotionally and mentally, a mastectomy may trigger various complications, which sometimes present a disturbing clinical picture.

Ani Papazyan, LMT, who contributed her article to the Case of the Month section of this issue of JMS, experienced exactly this case with one of her patients. We are sure that readers will appreciate her contribution as well as her professional expertise.

The patient is a sixty-seven-year-old female presented with gait issues.

After a Modified Radical Mastectomy (MRM) on her right side, the client started experiencing difficulty with her balance. She was unable to walk a straight line and did not feel secure enough to drive. She had no symptoms of vertigo. Her doctors suggested she see a physical therapist, but the treatment protocol consisted primarily of exercise suggested by a Physical Therapist did not help her. She was brought to our office six weeks after her surgery by a family member since she felt unsafe to drive because of her balance issues.

During the modified radical mastectomy, the entire breast was removed as well as the underarm lymph nodes. The client’s pectoral muscles are left intact. The most common symptoms after the mastectomy are muscle aches, swelling, limited range of motion in the upper extremity and scarring of the soft tissues, which may contribute to the sensation of chest tightness. Additionally, the intercostobrachial nerves very frequently are traumatized during lymph node removal, and can trigger burning, tingling and itching in the chest.

Issues with the gait are not common side effects of a mastectomy but there is a possibility of changes in locomotion in the post-surgery period. Considering that sometimes significant amounts of tissue are removed during the surgery, we may easily speculate that the mastectomy has a significant impact on upper body strength, the function of the upper extremities and eventually on the women feeling unbalanced with her gait. The last outcome can be easily explained by the loss of a large mass of tissues with millions of peripheral receptors, and irritation of the peripheral nerves. In such case the central nervous system receives completely different information and it may confuse motor cortex especially if patient is older women.

I speculated that since the client’s right breast was removed, there would be imbalance in the function of the right pectoral muscles and in right side trapezius, serratus anterior, anterior and posterior cervical muscles (including the, rhomboids) would be affected. My palpatory evaluation confirmed presence of tension and active trigger points in these muscles. They have many things in common: They stabilize the neck and upper shoulder, are innervated by lower motor centers in the neighboring cervical segments of the spinal cord and spinal nerves, which provide their innervation are affected by the tension developed in the corresponding parts of Dura Mater.

The Dura Mater is the outermost layer of the three meninges that covers the brain and spinal cord. The spinal nerves, which leave the spinal cord, are in very close contact with the Dura Mater. However, the most important piece of information recently discovered by scientists is the fact that rectus capitis posterior major and rectus capitis posterior minor muscles have a direct connection to cervical dura mater and may interfere in the function of the CNS.

Considering that mastectomy is a major trauma to the body, I was certain that her overall protective reflexes were greatly activated. Even when I palpated her right SI joint, she withdrew her body while she didn’t have actual pain there during my palpation. That is when I realized that I need to release pressure in the entire spine starting from her coccyx, because of its attachment to the dura all way to the atlanto-occipital junction.

The treatment protocol I developed consisted of medical massage techniques that include long massage strokes from the lower back to the neck, connective tissue massage, kneading strokes of the paravertebral muscles, application of friction and manual compression at the base of the skull with the client laying supine until I felt the relaxation of the cervical muscles.

I also used Primal Reflex Release Technique (PRRT) to affect the withdrawal reflex, which is spinal cord mediated reflex. This technique targets parts of the body that are associated with dural attachments especially in the coccyx area and in the area of the rectus capitis posterior major/minor muscles and ligamentum.

After the first 45 minute of the session, the client regained 50% of her balance. She did not return for the follow up session since two days after the first session, she completely regained her balance while walking and driving. 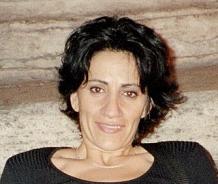 Ani Papazyan is a licensed massage therapist, certified nutritionist, certified lifestyle educator, and certified personal trainer. Ani educates clients regarding nutrition, healthy eating, lifestyle choices, and supplementation. She provides pain relief, stress management, and proper physical movement therapy enhancing the client’s lifestyle.
Since 1994 Ani has been working in the massage field with chiropractors and other healthcare professionals. Her experience led her to become Janet Jackson’s massage therapist during her “Velvet Rope” World Tour between 1998-1999. Since that time Ani has been working with professional and amateur athletes, dancers, as well as the general population, helping them recover from injuries, surgeries, ailments, and the stressors of daily life.